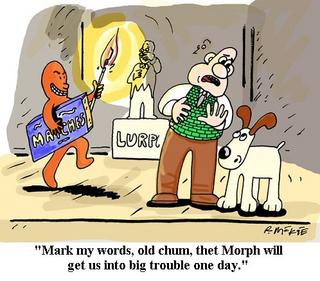 I'll bring the drawings up to speed shortly. Meanwhile, here's what happened, or at least this is all I can remember. The G-8 thing went ahead and those morons ripped up Princes Street Gardens in central Edinburgh, as a protest against, well, flowers I suppose. While they were here attracting police from all over the UK, the London bombings happened. Then the attempeted bombings by the gang who wired their bombs back-to-front, then New Orleans flooded, and now Pakistan has a homeless problem as large as the population of Scotland. As Nick Parkes said, after the Wallace and Grommit fire, 'in relation to what's been going on out there, this is nothing'. Nice, healthy attitude. Seems like a nice guy.
Posted by Rod McKie at 12:26 PM No comments: