I'm currently banned from Twitter for calling Bernard Jenkin MP a cnut.  I'm perplexed by this because I don't see any way Twitter can prove he isn't. He's a Brexit supporting twat from the ERG party-within-a-party Tories, who have constantly attacked Theresa May on the grounds that Brexit is crap because she's a weak negotiator and a woman, not because Brexit was pie-in-the-sky promises from a bunch of rabid old misogynist has-beens and their fanatical unicorn-worshipping fans. I called him a cnut because of his most recent outburst during England's council elections he said, I paraphrase, it didn't matter if the voters had now changed their minds, they've made their bed so they can lie in it. Not a philosophy he applies to his own grey hair, which has darkened considerably on top since some ludicrous poll amongst mad Tory women - gone to his head you might say. 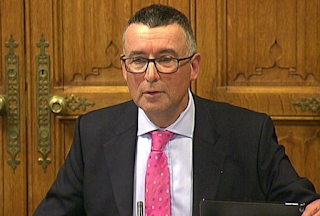 As my old friend GT has pointed out, he is just one cnut, amongst many others in the Commons.
Posted by Rod McKie at 9:35 PM No comments: