American author, Howard Phillips Lovecraft's (August 20, 1890 – March 15, 1937) stories and his literary philosophy of "cosmicism" , the belief that life is incomprehensible to human minds and the universe is fundamentally hostile to the interests of humankind, exert a tremendous influence on modern fiction, and have had, and continue to have, a profound impact on the world of comicbooks.  It is an influence that began during the author's lifetime.  In his essay, "H. P. Lovecraft and the Cthulhu Mythos", Robert M. Price identifies the "Cthulhu Mythos proper", a sharing of Lovecraftian-lore by Lovecraft's contemporaries, formulated during his lifetime, and subject to his guidance. The second stage identified by Price, is the stage guided by the person who coined the term the Cthulhu Mythos , August Derleth, who published Lovecraft's stories after his death, and attempted to catalouge and expand the Lovecraftian Mythos.  The second stage, the expansion of the Cthulu Mythos after Lovecraft's death, in stories, films, and comicbooks, has been so successful that librarians and booksellers still have to turn away would-be occultists who search in vain for the Necronomicon, Lovecraft's fictional grimoire of magical rites and forbidden lore.  The Necronomicon, as a shared element in fiction has surfaced in both the Cthulu Mythos Proper, and the later Cthulu Mythos.  In his short story, "The Children of the Night" (1931), Conan the Barbarian author, Robert E. Howard (a member of the "Lovecraft Circle" along with Clark Ashton Smith, the author of Psycho, Robert Bloch, Frank Belknap Long, Henry Kuttner, and Fritz Lieber), had his character Friedrich Von Junzt read Lovecraft's Necronomicon.  In his four-issue comicbook series Neonomicon, writer Alan Moore both expanded and subverted the Cthulu Mythos, by foregrounding, naming, and showing, graphically, the unameable terrors that lurk in the deep structure beneath the surface of Lovecraft's Mythos.  Lovecraft's Arkham Sanatorium found its way into the DC universe in the 1970s courtesy of Dennis O'Neil and during its time it has housed The Joker, the Riddler, Bane, and others and has featured in Alan Moore's Swamp Thing, Neil Gaiman's Sandman, and in a number of DC's mini-series. 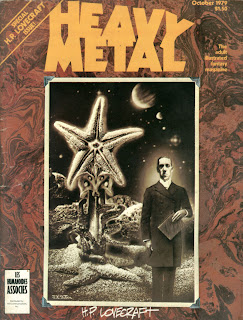 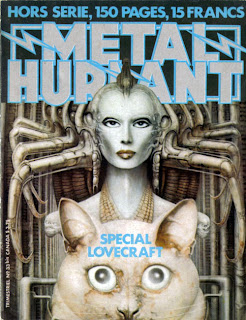 Let me just warn you in advance that I've left some stuff out and avoided scanning entire stories in order to make sure we don't inadvertently put anyone's hard work into the public domain.  What is left, I hope, gives you a feel of the collection.  I haven't randomly omitted things, but I have chosen the stuff I think works very well, either as faithful adaptations of Lovecraft's work or in expanding the Cthulu Mythos.  One of my favourite's is the first story, Final Justice, by Chateau.  The artwork reminds a little of some Weird Stories and even some Sandman episodes.  Whilst I like most of the stories, attempts at expanding the Lovecraft Mythos, like  KTULU by Moebius, could have done with a little more thought, I think.  I love the look of  Xeno meets Dr. Fear and is Consumed, by Terance Lindall and Chris Adames, The Man from Blackhole by Clerc, Dewsbury's Masterpiece by Charland and Cornillion and Druillet's Excerpts from the Necronomicon.  I could have done with a little more Randolph Carter and the Cats of Ulthar in The Language of Cats by Claveloux, but it is what it is and it all goes to show that whether you adapt Lovecraft faithfully or just drop a little Lovecraftian Mythos into your text or a little sodden Lovecraftian love into your drawings, you end up with an interesting outcome. 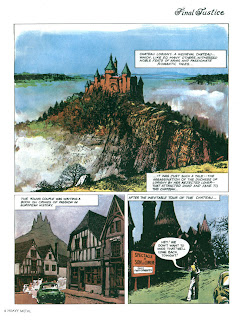 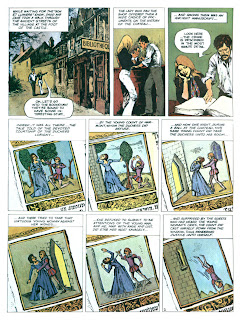 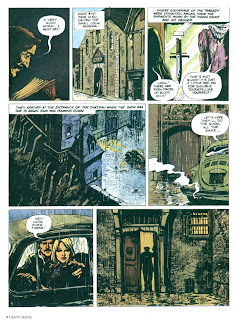 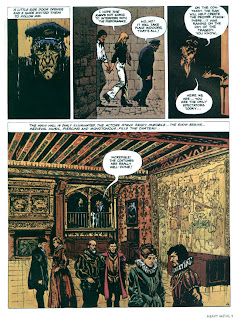 I have quite a bit of Breccia's Lovecraft work here at McKie Towers.  It is all very beautiful to look at.  If I had to imagine a perfect artist for Lovecraft's The Dunwich Horror, or any Lovecraft story it would be him. 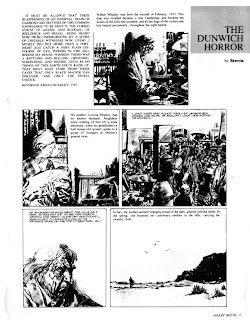 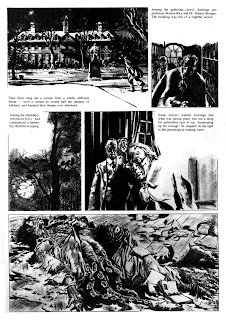 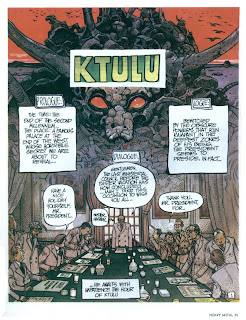 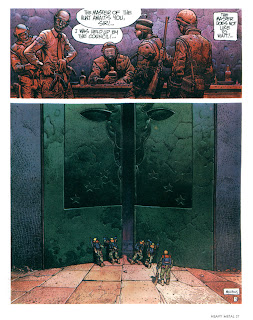 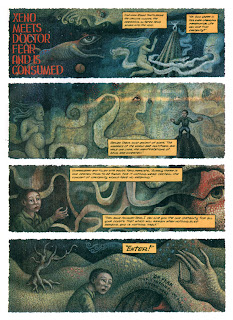 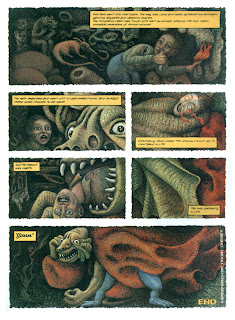 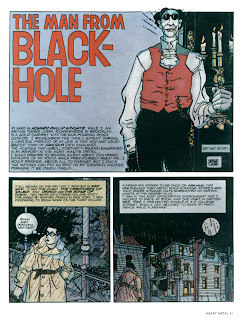 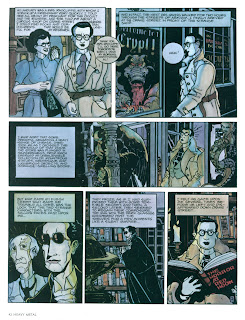 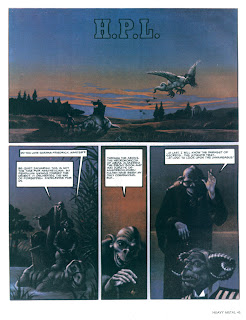 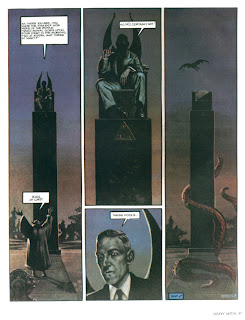 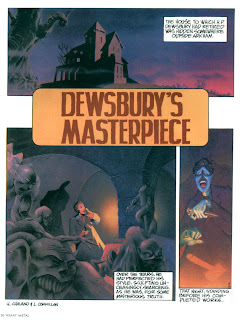 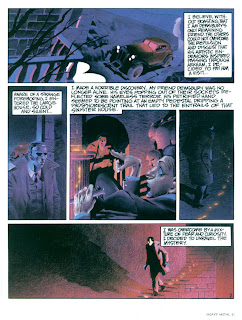 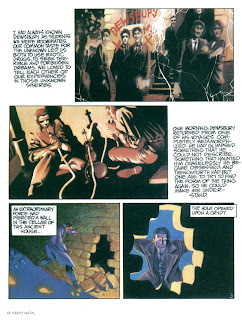 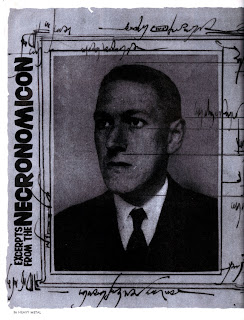 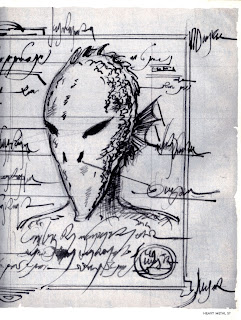 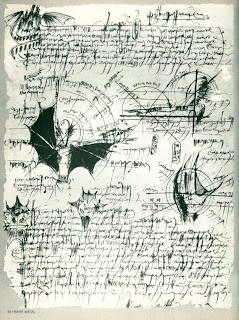 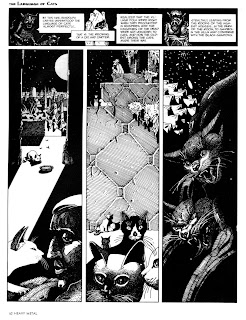 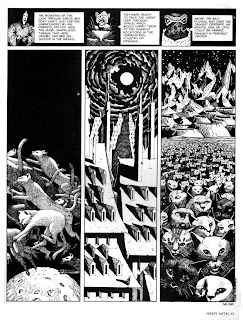