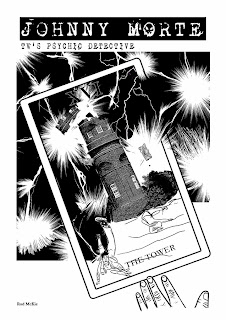 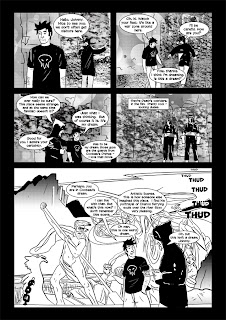 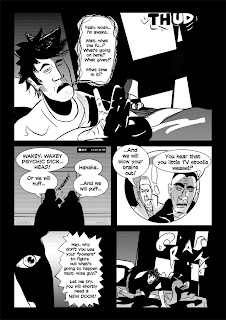 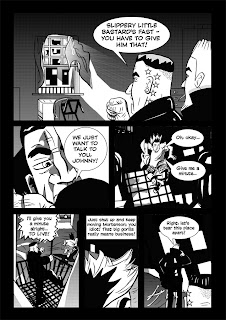 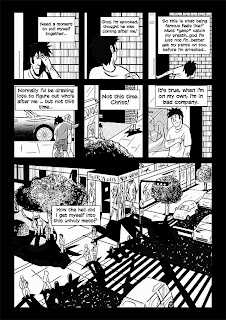 Well, I'm not sure about this one.  I'll know better tomorrow, when I look at it in a more detached way.  It will do for now, I suppose.  It is kind of comic bookish, which I like: 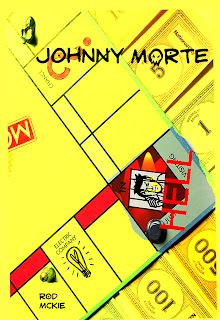 Anyone who has read the posts on Johnny Morte, from his beginnings as a mini-comic, will hardly find the inclusion of the Charon/Grim Reaper character a surprise, but I didn't want anyone unfamiliar with it to see all at once where the story might eventually go.  Which is daft really because all the details are on this blog, but I thought it was interesting to see how people reacted to the story without knowing it goes all supernatural.  Anyway, I've finished page 1, which obviously comes before the 6 pages in the post below this one, so let's imagine it there rather than have me deleting the previous post and posting again..  I'll put the cover up this week,  and maybe another few pages: 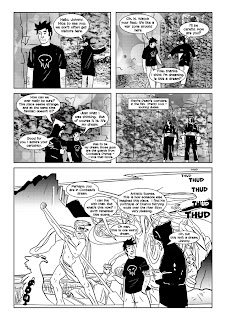 Hello Future Rod, it's Me Again.

Still waiting to update, but I'm going to post this and delete the previous post, because the drawings are more up-to-date and there are more of them.  Again, I'm holding page 1 back for the time being, as it gives so much away, so these are actually pages 2-7 of Johnny Morte #1.

I did a nifty thing here on one of the pages (bear with me if it's so bleedin' obvious I should shut up). I had been redrawing an ear and an eye over and over again, erasing the things and trying to get them right.  Then I remembered I was drawing on layers on the computer (I'm not kidding), on Manga Studio, so I took the rectangle tool and isolated the area on my "linedrawing" layer that I wanted to change, and increased the brightness on that area turning the black line grey, like pencils.  Then I created a new layer called "eareyeam" (injecting a little humour, you see) and drew the ear and the eye on the new layer, using the previous ear and eye as a guide for what not to do.  Then I highlighted the "linedrawing" layer and leaving the rectangle tool in place I erased the old ear and eye.  After that I right-clicked the "eareyeam" layer and merged it with the "linedrawing" layer.  I know it's a pretty obvious way to make corrections but I felt dead-chuffed about it. #EasilyPleased. 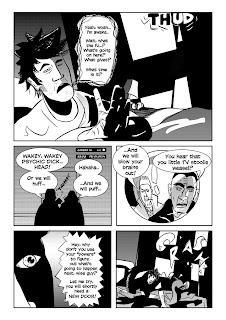 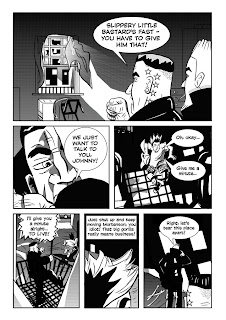 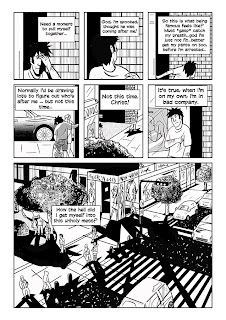 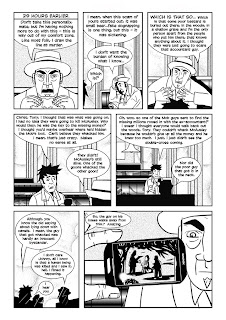 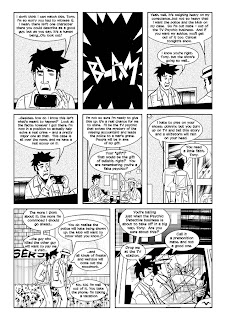 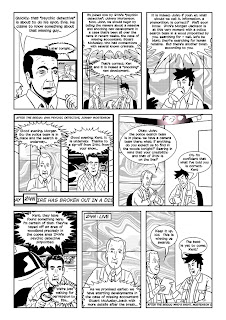 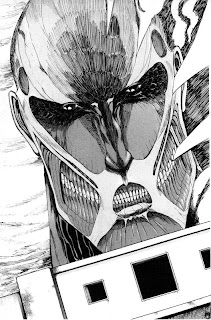 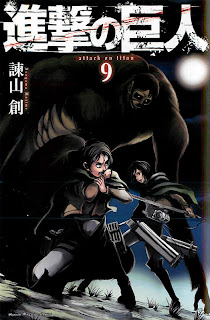 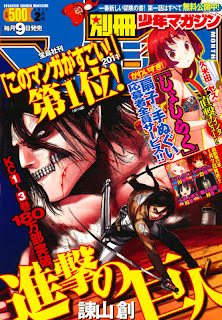 ...tiddely pom.  To quote someone else with very little brain.

I've drawn 26 pages of my comic book, A3-size, and inked them, despite the fact that I don't need to do that because I'll be inking digitally - but I did anyway, it's my way of finalising the pencils and checking continuity (or I'd edit from now until doomsday).  So whilst they look like final pages, they aren't, they're really my final pencils, and there's still one stage to go, the digital inking.  Which is why I was at the printer's, you see I have to get the drawings onto the computer and at the moment I have no A-3 size scanner, so I was there getting the drawings reduced to A4-size so I scan them in easily and quickly on my A4 scanner, without folding the pages and joining the artwork together on the computer - which is tedious in the extreme.

So, after scanning the reduced A4-size pages in, I went to work on them using a combination of Photoshop, Illustrator, and Manga Studio.  I used Photoshop to increase the A4 drawings back up to A3, reduced the levels so that the drawings look like feint pencil, and established a new layer before I opened the drawings in Illustrator, where they were inked.  In Illustrator, I imported the drawings with layers converted to objects, and started to draw, using Sherm Cohen's cartooning brushes.  After finishing, I imported the drawings into Manga Studio, where I ruled the pages, placed word balloons  and laid-down a layer of text.  I then exported the finished drawings as PSD files, and then I discovered the mistake.

When I exported the drawings from Manga Studio I took my eye off the ball, and halved the size of the pages when I reduced the resolution from 600dpi to 300dpi. So what I now had were A4 size drawings, again.  Oh, it's possible that it wouldn't have mattered that much.  Certainly, if I'd kept them at 600dpi, I'd have no problem increasing them to A3 at 300dpi, but I just feel that increasing A4 to A3 at a resolution of 300dpi, is pushing your luck.  So I've started again, only this time I'm doing everything, drawing, balloons, lettering, in Manga Studio, because I think that will allow me to finish inking all the pages by the end of the weekend.  Said he hopefully.

So this was the page all faded and I was building it a little at a time.  Having finished the panels and the balloons in MS, I was back in PS joining the balloons together in panel 2 and making the eye-hole for the door in panel 3 and I thought it was all coming along okay.  But the following day I discovered my sizes were all to pot.

(As always, if you want a good look at the pics (checking pen settings etc) right-click and open in a new window.) 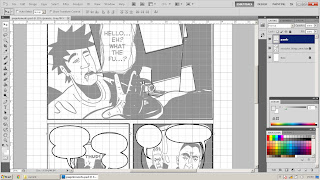 So this time I need to speed things up and I've straight in with the inking in MS, using the Maru pen, and since I do the panels and balloons in there I might as well do the lot in that programme. 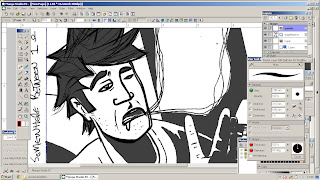 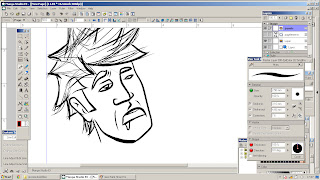 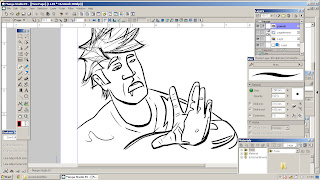 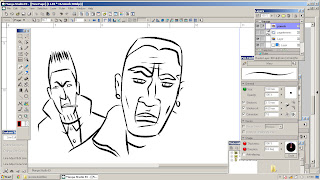 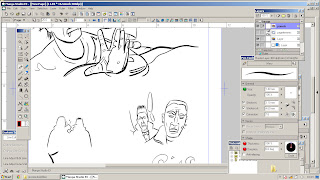 Back to Photoshop for that spy-hole though because it's easier for me to do that there.  Just a case of using the shape tool and setting the transparency.  If anyone wants to tell me how to do it in MS, I'm willing to learn. 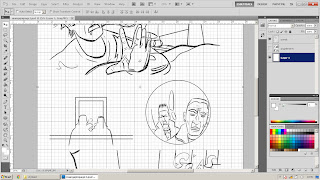 So it's not so bad, if it's a page that's got few straight lines and hardly any balloons.  When that's the case it's a little like tracing and it's a pretty quick job, but only because the pencil work is fully finished.  Otherwise it would be driving me up the wall..
Posted by Rod McKie at 12:00 PM 3 comments: