You know, earlier this month we gave Todd (Cloneman) Goldman the benefit of the doubt when he at least partly 'manned-up' to pilfering David Kelly's Purple Pussey cartoon. However, as more and more Cloneman designs are seen to be nothing more than the product of a fertile copying technique, he has set his litigious friends to work stifling free speech and debate on the Internet. This is of course doomed to fail, but the firm of Sue, Grabbit and Run are making a fist of it. I suppose my attempt to trademark a tee with 'Stolen by Todd Cloneman' on it is doomed to fail, then? 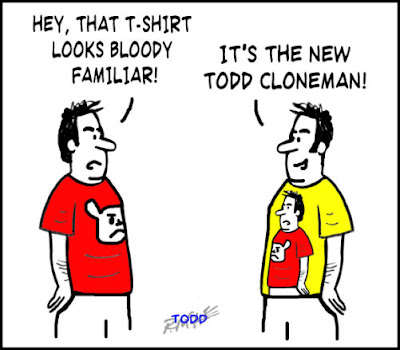 I don't know when it happened, but at some stage I gave up trying to draw the comics I enjoyed reading and went for the quick thrill of drawing funny comic strip characters.

The result is that drawing in a more 'realistic' (it's a drawing, just lines on paper so that's not a great description, but you get my drift) style is more difficult for me. That's not to say it is somehow easier for the guys mentioned above (British cartoonists), it's just that they make it look easier, or at least more natural. For me, my drawings are a bit contrived at the moment, possibly through decades of trying to make my cartoons look flat, but they will eventually loosen up and whilst I might never become as good as those mentioned, I will eventually be happy, or happier with what I can produce.

Anyway, the latest pages of Johnny Morte have been redrawn and I'm likely to put about ten of these on online, as soon as I letter them. They will replace the pages that are already there.

I haven't changed the story much, but the drawings are more angular and I think a little sharper looking - I won't be able to tell until I see them online. 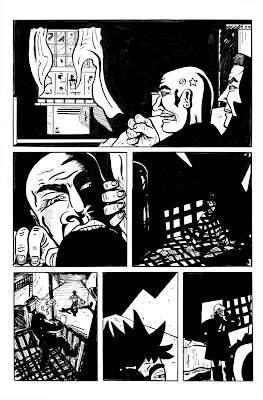 Well, at any rate he has fessed-up to purloining the Purple Pussy, to a point, but not to the other obvious rip-offs:

Popular post pop-artist, Todd Goldman who has made a career of making fun of the world with his sarcastic commentary and cartoon icons, has mistakenly used the design of an another artist in two of his recent paintings. Todd’s painting, “Dear God, Please Make Everyone Die”, was inspired from a drawing he received unbeknownst to him belonging to an underground web comic artist David “Shmorky” Kelly.


In addition to painting, Todd designs t-shirts for his clothing company, David & Goliath. Todd and his design team create and receive thousands of design ideas every month. It’s no secret that Goldman creates a lot of his painting ideas from his t-shirt designs. Goldman says “I made a judgment error and didn’t research the background of this particular submission. “My intention was not to copy Mr. Kelly. I have never seen his work before and would never intentionally knock-off someone else’s idea.”
Goldman has issued a formal apology to Mr. Kelly and has stated that he will not be using his design again in the future. As a gesture of good faith, Goldman has pledged not (to) profit from his mistake. He will instead donate his proceeds from the painting directly to Mr. Kelly or his charity of choice.


Yeah well, paying up is really the least he can do. Note the language in the last paragraph, 'not profiting' from this 'mistake' is key, and it is an attempt to make some wriggle-room in order to avoid accusations of fraud. Well, you know what, when an 'artist' with a reputation like Todd Golman's uses someone else's work for his portfolio and gains more acclaim from that usage, he profits indirectly from it, so he's really going to find it hard to wriggle out of that one. I reckon paying up big is the only way forward.

As for the numpty (good old Scottish word) who suggested on a forum that this is legitimate use and it's like Andy Warhol using a Disney image, er, no it's not. The one in the position of unequal power in this relationship is the (Lord knows why) 'acclaimed artist' known as Todd Goldman, who has ripped-off a 'lowly' web comic artist. Not cool, not classy, not professional, not ethical, simply not done.

Check out these links: 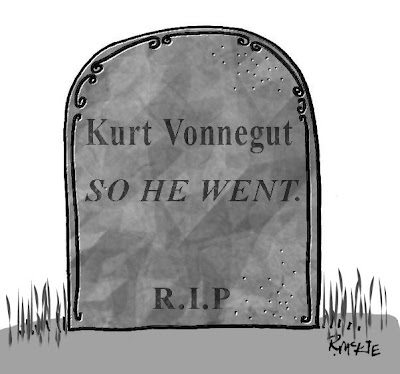 Kurt Vonnegut, that often dark and heavily satirical veteran of the US counterculture, the brilliant author of Slaughterhouse-Five, died yesterday, aged 84. Go read at least one of his books.

Why create, when others can do it for you?

(Let me be honest, I'm not really a fan of David Kelly's cartoons, they are not my style, but they look more impressive artworks to me, than the stuff that Goldman produces - except when...well, read on...)

You don't know the answer, then maybe this will will enlighten you - this drawing is from Kelly's Purple Pussy, from his archive, from 2001: 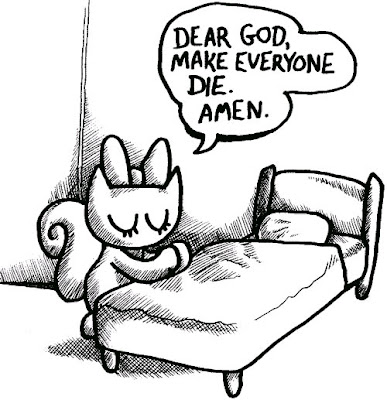 And this is from a much more recent gallery collection by 'world-renowned' artist Todd Goldman: 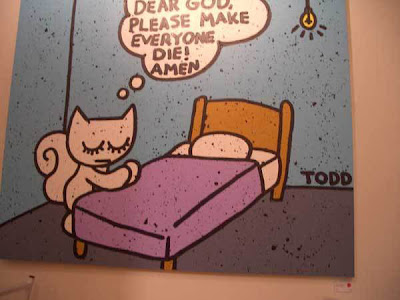 I think I can spot one or two similarities. Of course the major difference is that 'world-renowned' artist Todd Golman gets a tasty six-figure sum for his, er, originals!

The following sites cover the story in more detail, and one or two even pick up on the apparent likeness of Goldman's Eve L to Roman Dirge's Lenore character. * A quick addittion: both my daughters are fans of Lenore and have some comics and stuff - Roman Dirge mentions the offender on his blog:

You Thought We Wouldn't Notice