Turf (Image Comics) by Jonathan Ross and Tommy Lee Edwards, was always going to be well drawn. Tommy Lee Edwards is the western equivalent of the very best mangaka - he draws like an angel. Whether or not it would be well-written was open to question, despite Jonathan Ross's love of comics and his extensive comic book collection, Wossy was very much an unknown quantity in that respect. 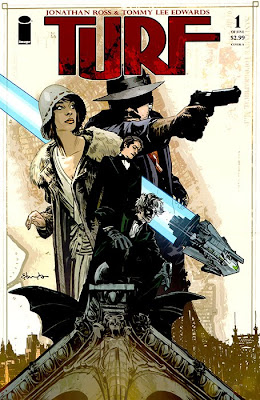 So if you haven't picked up Turf yet, and a lot of you have as each issue sells out pretty quickly, let me put your mind at ease; Turf is as much fun to read as it is to look at; and that's saying something. Note to self: do not, do not, ever, look at Tommy Lee Edwards artwork while you are drawing a project yourself you will only become as depressed as Salieri looking at a handwritten Mozart score.

Make no mistake, Ross has written something pretty special here, at times verbose, occasionally clichéd (seemingly, but that's part of the joke), it is a story that teases and tantalises and even dares the reader to spot the joke, or to consider the juxtapositions too, too, coincidental. 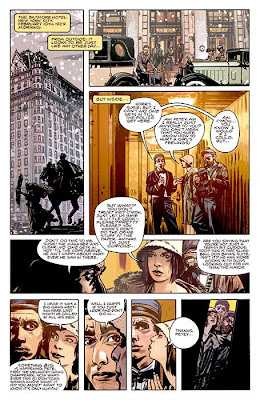 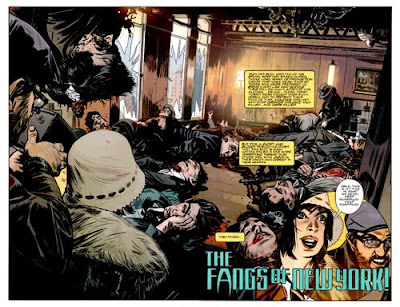 Told in dialogue, in illustrations, in the yellow-coloured exegesis of the omniscient narrator, and in the thoughts of the protagonist, sometimes all at once, Turf makes some other comic books out there look like they are grid-locked in the slow-lane with the "special" kid taking the wheel for the first time. 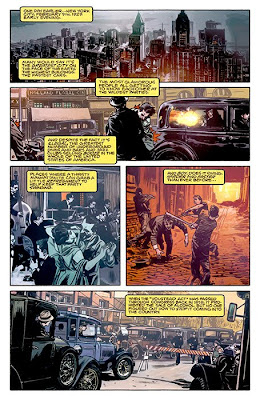 Right from the start it is clear that the narrator knows more than he or she is telling, or the drawings are subverting the narration and exposing what the narrator is not saying (both of which are pretty fucking sophisticated possibilities for a comic book). The story of the "disappearing" Hancock family, who "sell" their stately home to the leaders of the Dragonmir Clan, and who we can clearly see being buried in shallow graves, sets the tone for the playfully macabre narration.

While all this is going on, Tommy Lee Edwards is drawing up a storm. The vintage cars and clothes and architecture are a delight, of course, but what astonishes me is how he captures the noise of the period, the industry, without resorting to in-your-face sound effects. There is one panel where a beer, or Canadian blood, shipment is being unloaded, and you can just sense the noise. And then there's the flying, that is noiseless, it is a gentle raising in the manner of Peter Pan and his Lost Boys - these are masterly effects that appear effortless, though doubtless are not..

I absolutely love the page where The thoughts of Susie Randall take over the narration, a point only made clear by the position of her in the centre of the page - and only crystallised upon turning the page as this wandering thought joins the think balloon above her head. This is a perfect example of the writer and the illustrator working very closely.

Throughout, there are little authorial conceits that tease and please, when Susie Randall chastises Dale with "you might as well be drinking blood" we can see Stefan surveying the scene with a drink (more than likely blood) in his hand. And the words "...outer space" actually cut to a "meanwhile in outer space" scenario where a spaceship is about to collide into this vampir/gangster epic as the bootlegging Squeed, fresh from stealing from the more civilised Mantii, crash into the story. 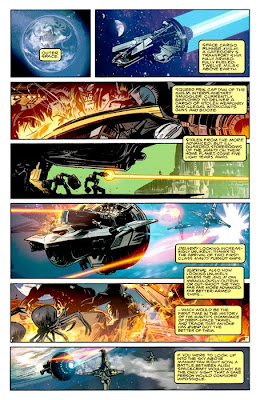 Make no mistake; this writer will take your feet from under you, if he needs to. The clever titles all appear to have layers of meaning, Turf #2; Aliens with Dirty Faces, is clearly a play on the title of the gangster epic Angels with Dirty Faces, and perhaps also a play on the theory in some circles that the biblical Angels might have been aliens.

This tale of the sibling rivalry at the head of the Dragonmir Clan, as one brother vies to wrest control of the City from the mob, is a glorious blood fest. It is a tale of the tearing off of heads, with "...who the fuck are you gangsters" juxtaposed with "...the heck are they reporters". This is sassy writing; it is a His Girl Friday for the modern era. I mean, come on, the gangster Eddie Falco helps the aliens who help him by blasting the vampirs, and meanwhile, "The Old One" mentioned in the vampir prophecy is awakened and is clawing his gnarly way out of the ground, and we hope, against hope, that the truly vile beast O'Leary gets wacked -- that's bang for your buck, mate. 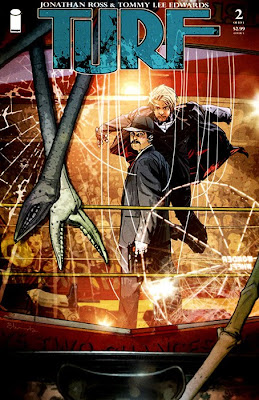 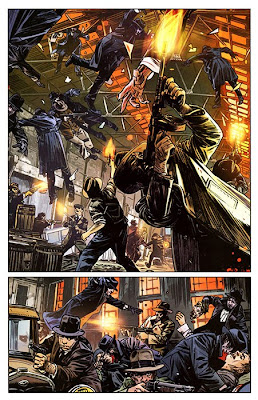 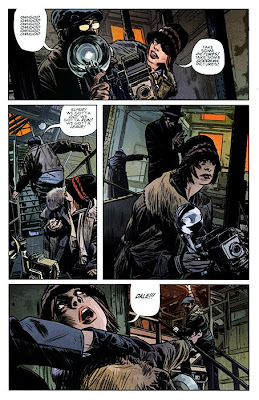 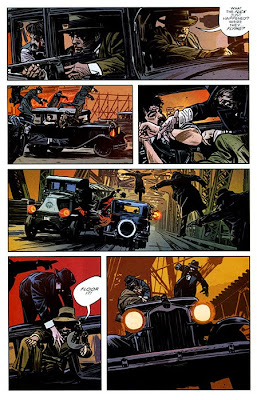 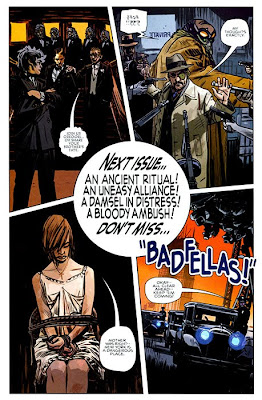 It is slightly unbelievable, I admit, that in this tale of vampires and aliens that nobody is a simple cipher, that they are all characters made with fleshed-out words and pictures, but it is true. And if you want to see some masterly drawing to match the masterly script, look no further than The cutthroat razor scene - that is a page full of tension, for the reader, who can see more than the central characters as the scene unfolds- how the hell did Tommy Lee Edwards do that?

Turf #3 Badfellas will be out later this month, and I can't wait to see just what the hell is going to happen next. 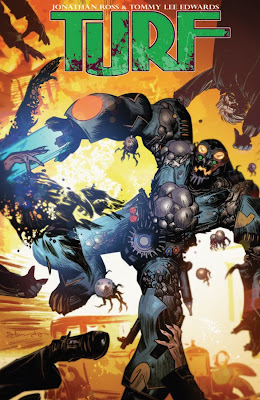