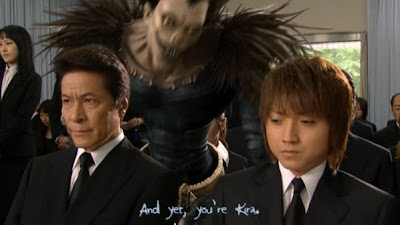 Right, that reminds me that I should have started the IManga blog long before now and my Death Note review of the Manga, live-action movies and anime, should be on one long, full, flowing, page. I promise I will get round to it.

This is news though. After one serious hiatus Mishicorp and Sars have finally hard-subbed Death Note 2, The Last Name, as beautifully and lovingly as they did Death Note 1. I won't link to it as obviously I would rather you bought the DVD, of course, but I thought that all you Death Note fans should know it is now out there, in the wild. 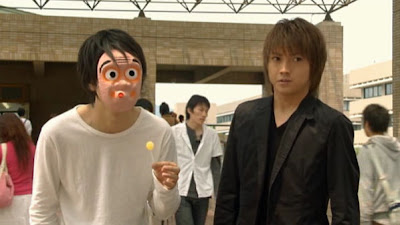 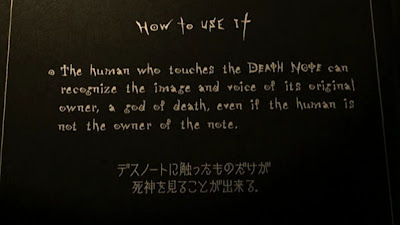 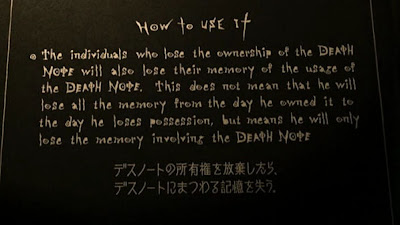 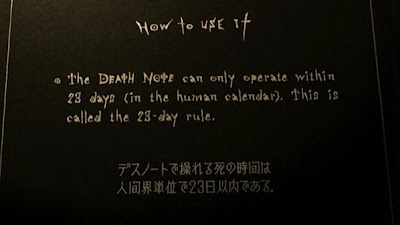 Well, the article below, which triggered my Guardian -inspired rage aimed at that paper's habit of running lofty articles on cartoonists and cartooning was actually written by Susan Tomaselli for 3: AM Magazine, which is a must-read (their slogan is 'whatever it is, we're against it' which could almost be my mantra)- go now! That it was on Guardian Online was enough, of course, for the random ranter to strike.

To be fair (now that the legend The Guardian is removed from my eye line), Susan's argument has merit and I have heard my cartooning chum Patricia Storms, a book lover herself as her blog illustrates, pose the same questions. I have considered that the reason GNs deal with more serious subjects and autobiography, more than with humour, is perhaps in a desperate attempt to quickly gain credibility as the art form gains such speedy acceptability; but I suspect it has more to do with what the publishers want, and so it they who are insecure about the relative merits of the genre, not the cartoonists.
Posted by Rod McKie at 11:46 AM No comments:

The Guardian Online thinks cartoonists belong in their place

I posted this reply on the Gruniads forum, but it may vanish, on account of it being too long, or something. Here's the article:


Oh dear, we Court Jesters have overstepped our mark. We are daring to be more than funny. Ho-Hum.

The odd thing is the Gruniad has acted as a forum for very few cartoonists over the last couple of decades, but it has championed Posey Simmonds work. Now I like Posey and her tales of comfortable middle class life in rural England, but I'd never accuse her of being funny - she left that behind when she dropped 'Bear' and headed into Gemma Bovery country. So whilst the paper runs 'serious' cartoon work, it doesn't really approve of the 'fashion'?

I see you mention Peter Bagge, Tony Millionaire and Johnny Ryan as funsters, well, they are all very different cartoonists, and I take it you are referring to Peter's Buddy Bradley comics about drug-taking and suicide (I think Stinky meant to kill himself) and the like (which I find hilarious - I'm a huge fan) and not his online strip for Reason; which may be a little too serious for your liking? It may also surprise you to know that Johhny Ryan has tackled (haw) the serious subject of testicular cancer, in a funny about Harvey Pekar, which Harvey might not have enjoyed and Tony, well, Tony Millionaire's Maakies have made their way onto Adult Swim (coming to the UK soon I hope) but the strip didn't make it to The Guardian did it? Maybe the Guardian could run the strip instead of the incredibly unfunny IF? It's also worth baring in mind that Millionaire is a very serious children's author and his Sock Monkey series and his latest kiddy book Billy Hazelnuts are always very well recieved. Whilst the three Fantagraphics cartoonists you have chosen might be 'funny' you'd be wrong to think they aren't serious cartoonists.

As for Mom's Cancer, it went from online comic to indy paper (again, not into The Guardian) to book deal, and it was long journey that Brian's Mother was actively involved in. None of his fellow cartoonists begrudge his success and I can assure you he has made it perfectly clear that he would give up any fame, or money, Mom's Cancer has afforded him just to have 10 more minutes with the subject of his excellent book. What would you have had him do, create a fictional 'funny' story for you to enjoy?

No wonder our best cartoonists and comic writers send their work overseas where it is taken seriously. Can you imagine this discussion taking place in Japan, or France, or Italy, or the US? You know, I think the problem is that over here, in the UK, cartooning is a third rate job done as a hobby by people with little or no training or education, whereas in those other countries the cartoonists choose to leave university, art school, cartooning school even, or in some cases a career in Law (Stephan Pastis who draws the syndicated strip Pearls before Swine was a lawyer) to take up what is regarded in their countries as a profession.

Alternatively, writing 'serious' fiction in the UK is usually a job for the Oxbridge elite who use their trust funds to fund the writing that they submit to their classmates who have moved into publishing. The results are then sent to the other Tristans and Jaspers who 'work' as literary critics, and the circle-jerk continues for another generation. I can see, in this scenario, how scared they might be that an actual talent, like being able to draw, might be needed to sell a manuscript someday.

I have made my feelings about this paper's approach to cartooning abundantly clear, The Guardian would much rather print a five-page article lauding a work by a cartoonist than actually run any strips or stories that are relevent or new, so this attitude doesn't really surprise me. You better suck it up though, graphic novels about 'serious' subjects, indeed about any subject, are growing in popularity and look like being the 'in-thing' for some time to come.
Posted by Rod McKie at 12:07 PM 1 comment: 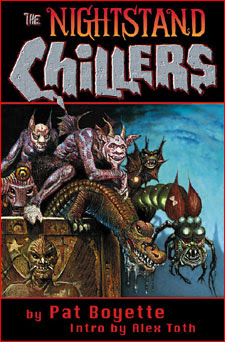 Firstly, let me thank Steven and WD for swinging by and giving some valuable thoughts to the Ditko/Boyette.
Of course a simple mistake was always the most likely scenario. Although back then, in the 1970s I hadn't started working in comics and there was no internet so finding facts about the US-based comic scene was pretty remote. However, through my contacts with some magazines where I was already selling gag cartoons and hoping to sell short stories, I knew some publications had a list of female names that male writers could choose an identity from for writing fiction - so back then the possibility that Pat Boyette was a pseudonym for a lot of artists was possible.
However, I thought this would be a good exercise for both Ditko fans and those Pat Boyette fans who feel that he is vastly under rated, and a good few souls on The Comics Journal forum threw up the usual high level of expertise on the man himself, my thanks go out to Russ Maheras, Mike Hunter, Alex Buchet, John Hanley, J Romberger, Tom Spurgeon, Craig Yoe, John Hanley, Matthew Wave, and Christopher Meeks (this could be the brilliant writer of The Middle Aged Man and the Sea).
Also, let me tip my hat to Grant Miehm, Lee Nordling and Arnold Wagner for additional Boyette stuff.
I think between us we scouted out some great links, you should go to TCJ and check 'em out:

What's in a name? Let your inner-Otaku speak.

I have always been in awe of people who work, in any field, in anonimity. In the Art world it's pretty rare, unless of course it's a selling point, like Banksy being a real 'underground' tagger (oh yeah).
But there are practical occassions when cartoonists have done this, in the past in particular, for instance when one worked for one of the big two comics publishers here in the UK, one may well have been 'discouraged' from working for the rival publisher. The same was true of DC and Marvel at one point, I'm sure. Which brings me to my first question, 'when is Pat Boyette art, not Pat Boyette work'?
Seems like an odd query, I know, but when Steve Ditko left Charlton comics, Pat Boyette took over some of his stuff (there's a pair of drawing boots to fill), I am now informed. Now, I have a particular comic here that I have puzzled over for years, it's Ghostly Tales #43. I'm totally sure that the first story, where the art is credited to Pat Boyette, is in fact by the great Steve Ditko, it positively reeks of Spider Man and Doctor Strange and just too many Ditko touches for it to be a ghost work - I think.
However, just to be contencious, I'm contrasting it with an uncredited Ditko page, again from Charlton, this time from The Many Ghosts of Doctor Graves; and just for good measure, with another story where the artwork is credited to Pat Boyette. Now, for years I have just assumed that for contractual reasons a bunch of artists worked for Charlton on the fly, and used the psudonym, Pat Boyette, but I read on another site that Pat Boyette was real and worked for Charlton, so I'm confused and bewildered, so I'm throwing it open to you, here is the artwork for you to subject to close-reading and content analysis (you may begin, now:>): 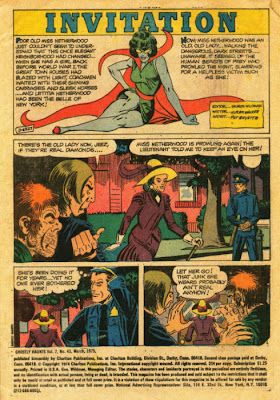 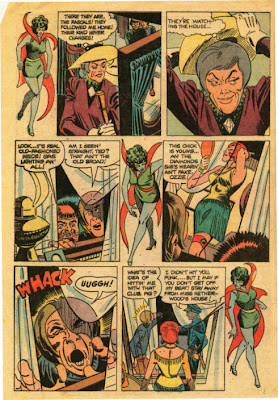 I'm sure this is Ditko because nobody could ghost him this well, and surely nobody ghosting him would go so far as to include Ditko's almost trademark patterning in the work: 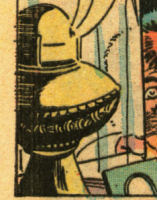 I mean, this uncredited page from The Many Ghosts of Doctor Graves is clearly by Ditko and not a ghost artist, precisely because of such detail: 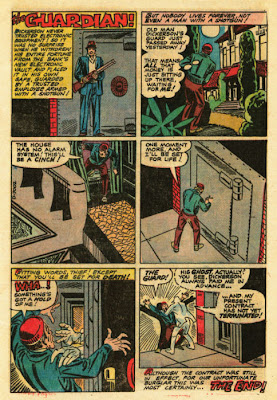 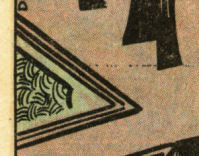 And whilst this form of crosshatching might easily be used by many cartoonists, it adds to the feel of the work and the weight of line and the characterization that a comics fan; a geek, if you wish, can easily recognise.

So now we turn to the second work in Ghostly Tales #43 that is credited to Pat Boyette, and we can see that whilst it is really good art, with it's own style (I know people who prefer it to the Ditko style), it is clearly not drawn by the same hand as the earlier story: 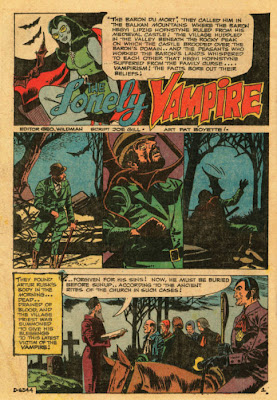 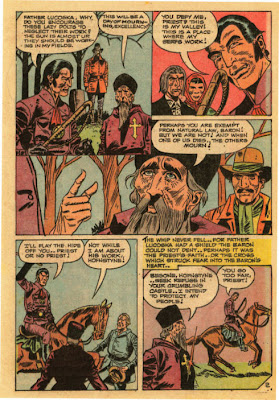 Again, let me be clear, I really like the artwork on the second story, but which of these, if any, is drawn by Pat Boyette?

While we are all here talking about Ditko, I thought I'd show you this; it's a fantastic example of the man's pencil and artwork from one of my favourites, The Creeper (which I purloined from Dial B for Blog, a great site): 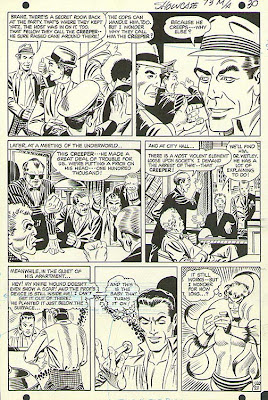 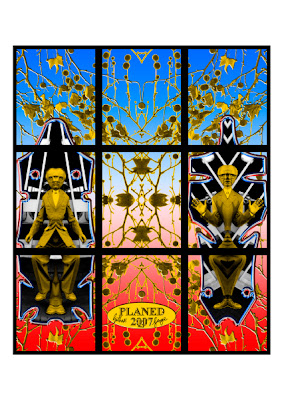 In addition, on the site, you'll find a video of Georgebert knocking the piece together on the computer and his wizardry is a wonder to behold.
Posted by Rod McKie at 3:48 PM 4 comments: