Gerard Whyman, Oddly, not, Distracted, at all. 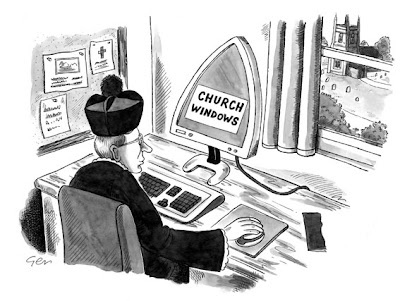 I'm putting the finishing touches to a post that I'm hoping Forbidden Planet International will run, it is about getting your cartoons, illustrations and books out there on new media. I mean, I don't know if you've noticed but newspapers are closing left right and centre, and some big titles have limited cash, and rely on firms that are going bust to fund their print editions through advertising. Many of these titles, some through choice and some through necessity, with publications like the Christian Science Monitor lighting the way, are going to appear only online. They can, of course appear on other media, and it might be a good idea if you know how to deliver your work on the same devices. 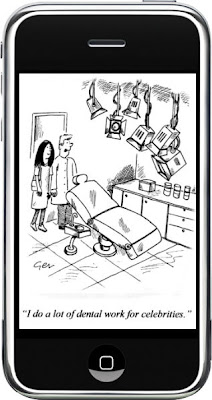 A Ger Whyman cartoon, from Oddly Distracted, on the iPhone 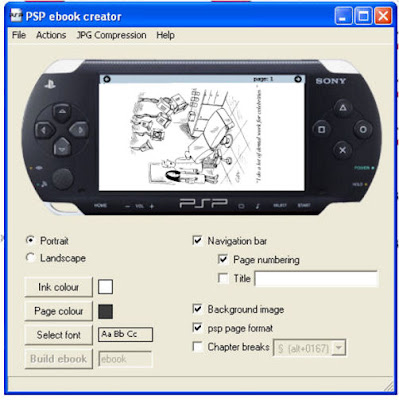 A Ger Whyman cartoon, from Oddly Distracted, being formatted for the PSP. 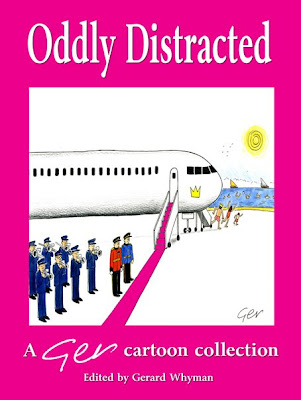 Meanwhile, I'd recommend a good hard-copy of the book (click here to go to LULU) because it has nearly 200 cartoons and it represents excellent value for laughs delivered - click here to see a chart I made of the laughs per page ratio - kidding; but go buy it. 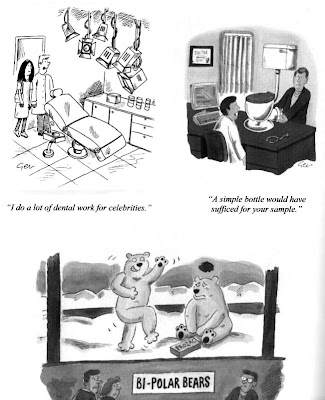 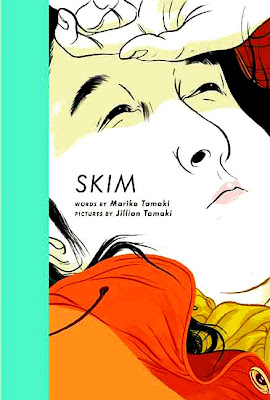 My attention has been drawn to this thanks to Fantagraphics Dirk Deppey being ever vigilant and Drawn and Quarterley's Peggy Burns helping to spread the word. This is hopefully going to be just an oversight - I'm sure.

The odd thing is, this ties in with a piece I'm sending to Joe at Forbidden Planet about the importance of "some" illustrators, later tonight.

Okay, listen up, especially you, my Canuck chums, although every illustrator out there should be interested. This is very important because although it might be a simple oversight, a mistake, and I might have to eat my words, it could be, although I'm sure it is not, the written word-worshipping literati of Canada flexing their muscles and trying to regain primacy in the face of the increasing popularity of graphic novels (we are stuck with the term so suck it up). In what could be be, as I have just said, simply an oversight, Skim, the tale of Kimberly Keiko Cameron, a goth girl in an all-girls school in Toronto, is up for, at least the writer, Mariko Tamaki, is up for Canada's very prestigious Governor General’s Literary Awards. The thing is, and once again I'm sure it is simply a horrible oversight, the illustrator of the book, Mariko's cousin Jillian Tamaki, has not been included in the nomination.

Ridiculous, I know, fortunately two of Canada's most high profile illustrators, Chester Brown and Seth, have been moved to write a strongly worded letter to the awards committee asking them to reconsider for the following very, very, important reasons:

We're guessing that the jury who read SKIM saw it as an illustrated novel. It's not; it's a graphic novel. In illustrated novels, the words carry the burden of telling the story, and the illustrations serve as a form of visual reinforcement. But in graphic novels, the words and pictures BOTH tell the story, and there are often sequences (sometimes whole graphic novels) where the images alone convey the narrative. The text of a graphic novel cannot be separated from its illustrations because the words and the pictures together ARE the text. Try to imagine evaluating SKIM if you couldn't see the drawings. Jillian's contribution to the book goes beyond mere illustration: she was as responsible for telling the story as Mariko was.


Seth (Author of It's a Good Life, If You Don't Weaken) 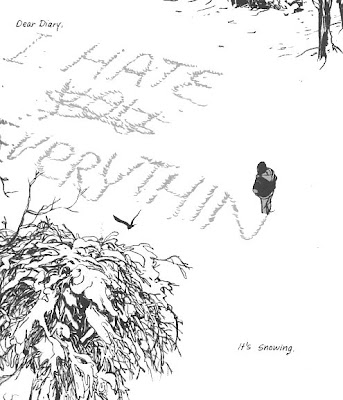 It's clear from this drawing that the words "Dear Diary...it's snowing." and the drawing above are working in consort to convey a mood and a meaning that is beyond what is written on the page. This is not a tacked-on drawing illustrating redundantly illustrating the obvious, in a way that one would find opposite a page of text in a picture book. The description of the scene is non-existent because that information is conveyed in the drawing, along with the hallow triumph of creating the pointless message in the lonely landscape. It is, at once, a beautiful, and sad, moment. 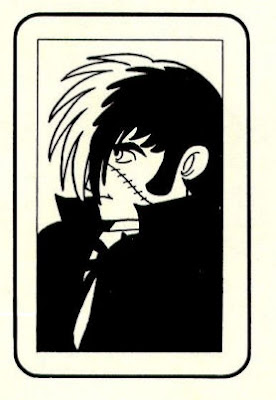 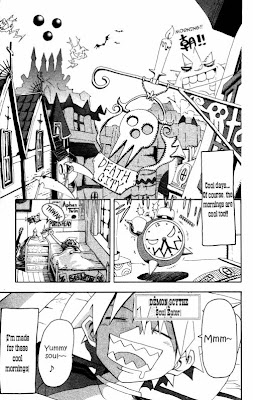 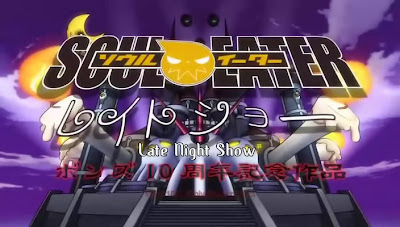 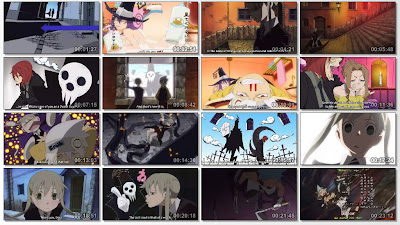 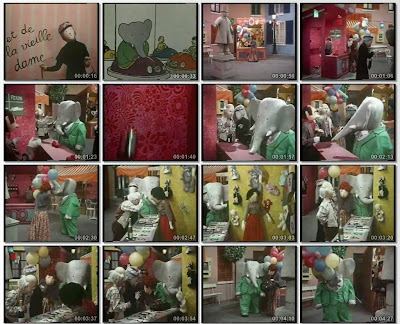 A tip I got years ago, and which I stick rigidly to, is when you are working on a number of things, all at different times, lock them away from view until their turn comes around again. Then when you take the thing out to work on it again, if it still excites you and still looks like a good, workable, idea, it's a potential winner - you'll be surprised how many "live projects" look absolutely ghastly when they come back out into the cold light of day. On the plus side, you can really recommit to the work that still looks like a good idea.

I'm really pleased that Johnny Morte passed my self-editing test, because it's a bit of a favourite and it has to be a favourite of mine because at the moment all the changes I'm making are being done with the mouse; until my new graphics tablet arrives. It's challenging, especially when it comes to making curves, although that's easy to do with something large like the skull in "Morte" which I made with the Vector tool you have to be really creative to make little things like finger tips. 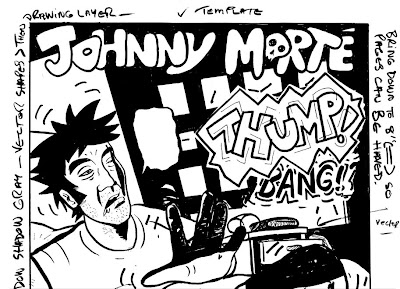 I was in two minds, but I've decided to go forward with a flat cartoony look because I enjoy comics that look like comics so that makes the redrawing much faster. 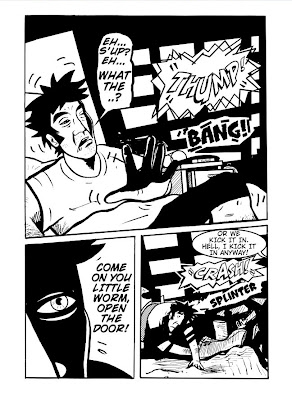 I'm also putting a colour version together, and again I'm going super-flat. Once again this is a reaction to the dreadful over colouring you see today in so many comics. 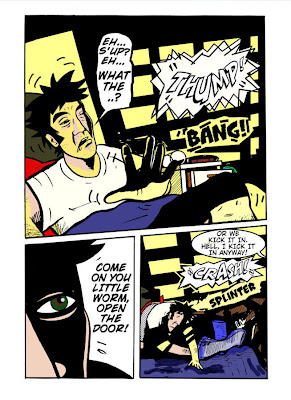 I've reworked a couple of pages already and with luck, when the pen comes, things will speed up and it'll be finished before the year is out.