Works in Progress 3: The Bee-Man

The Bee Man is the most labour-intensive project I'm working on at the moment. I actually took a break from it to finish all the Eddie and the Banshee drawings. It's a solid 7 days-a-week project when I work on it. I should be finished in about 30 days, give or take: 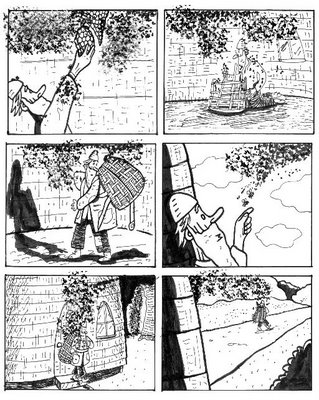 Eddie and the Banshee is just about finished. I'm going to tighten up the story and finalise the layout and that'll be that; until the Ed's get their hands on it, of course: 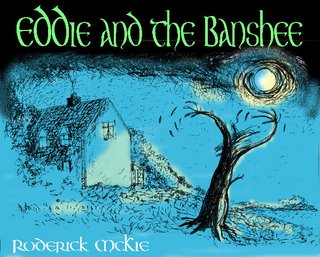 I've drawn about 50 new cartoons and some have already started to age, which is the problem with cartoons about transient contemporary phenomena. 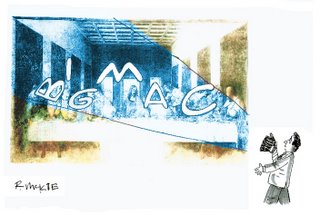 What a 'mare Blogger can be at times. I've just spent a fruitless period trying to update my Cartoon Fiend blog, but Blogger keeps knocking back the graphics. I managed to upload some, but I had to resave the jpegs before they would go up (no idea why). I'll try again, and if it doesn't work I'll just host them again. It's a apain.
Posted by Rod McKie at 12:21 AM No comments:

I mentioned you in Dispatches.

One of my favourite cartoons is an old Punch cartoon by Michael Ffolkes, a couple of soldiers, in the trenches, and one is saying to the other 'I mentioned you in dispatches - I told them you're an absolute rotter.'

My Cartoon Fiend blog got a mention on two of my favourite blogs this week, Drawn and Mike Lynch's cartoon blog. I was so busy trying to upload graphics to the Cartoon Fiend blog I hadn't done my usual rounds which are, Cartoonist Club of GB Q and A forum, Darrin Bell's Toontalk site, the (cough, cough) Wisenheimer, the Comics Journal forum, my email, and then Mike Lynch's blog, Drawn, and Book Lust and all their associated links (all of which keeps me online for about 16 straight hours).

So, anyway, I was sending some email and I happened to catch a glimpse of my site statistics for the Online Cartoonist site (which is still a work in progress), and hundreds, literally, of people had paid me a visit in one day, which is highly unusual. I had no idea what had gone on, until I found those blog entries, that is. Man, it helps to have friends in high places.

Anyway, I did manage to do the rounds today and Drawn has a brilliant piece on some newly discovered drawings from Winsor McCay’s first comic strip, Tales of the Jungle Imps, which the grandaddy of animation did in 1903. Hand-coloured stuff, no less. Sumpteous. And Mike Lynch has outdone even himself, this time, with some brilliant photos of the NY NCS bash from his beloved Overlook.
Posted by Rod McKie at 1:35 PM 1 comment:

Violence, Mott the Hoople were wrong! 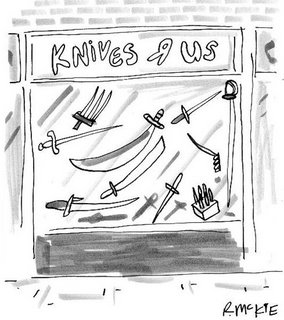 'Violence, it's the only thing that'll make you see sense'. Well, that was easy for big-haired Ian (a man with wringlets) to belt out at the time, I suppose - but it's getting to be a nightmare out there.

Just the other night, in Edinburgh, a 33 year-old man was stabbed in the side when he passed a group of youths on Slateford Road. So, there's a fun night out for all concerned.

We now have a situation where it seems that every yobbish youth carries a knife as an 'offensive weapon'; which is leading normally law-abiding, non-yobbish youngsters to carry knives as 'defensive weapons'. Pretty soon everyone will be armed, just in case. I tell you, per capita, if we could carry guns in Britain, we'd have more murders than there are in Iraq; where the average life expectency is around the same age as it is in the Royston area of Edinburgh. And the knife-carrying youngsters are getting younger and younger, with more and more 11 to 13 year olds
carrying the things. Now where can they be getting the impression that violence is the way to solve all your problems?
Posted by Rod McKie at 1:09 PM No comments:

Well, I haven't slipped, it's just that Blogger can be a trifle duifficult at times. I spent hours try ing to get Dave (Loose Parts) Blazek's interview onto my Cartoon Fiend blog. I tried to upload graphics for two days, to no avail, and then decided to host them myself on my Online Cartoonist site. Anyway, Dave's interview is online now - and it's both informative, and funny.
Posted by Rod McKie at 1:03 PM No comments: