Euphrosene just mentioned "sew". I should have pointed out it's a pun that relates to an incident in the story, so the biblical quote is deliberately misquoted. She's a real clever-clogs, you know.

You know you've hit the groove when you are working on something and you successfully blank out everything and everyone and then you look up and it's suddenly 3 or 4 am and you are the only person left in the room.

So I hit the groove at 4.30am today and realised that I can get the scanned pages of Johnny Morte, PI to the Damned, You Reap What You Sew, to look exactly as I want. It's slow progress though, until my new graphics tablet arrives, because each scanned page is taking about 4 or 5 hours to clean and tart up with the mouse.

One mini dilemma was the font. I'm not going to hand-write it because I have my own font, but I decided to use Comicraft's Pulp Fiction font for the cover and Comicrafts Wicca font for the inside page. The rest is my own font. My plans may change (thank goodness for layers!).

So the entire story is finished and parts of it are scanned in and one or two pages are finished and I've made web copies of a handful of them. It looks, all told, like maybe two weeks work and then I have to decide what to do with it. It may go the conventional publishing route but it may not - I might just do it all myself. It depends. 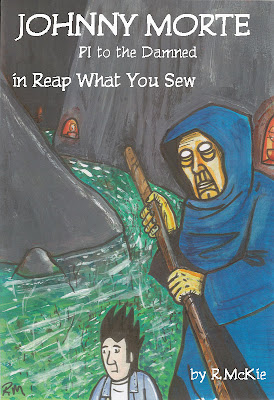 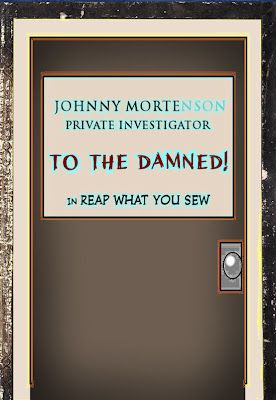 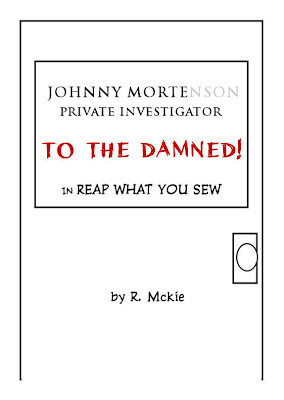 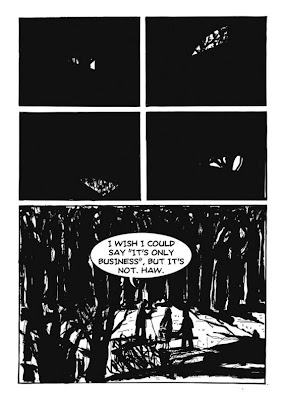 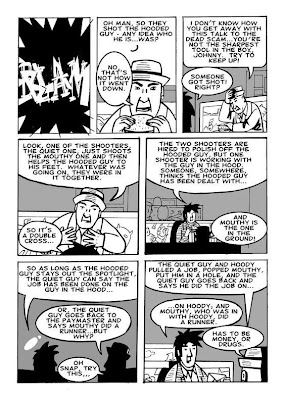 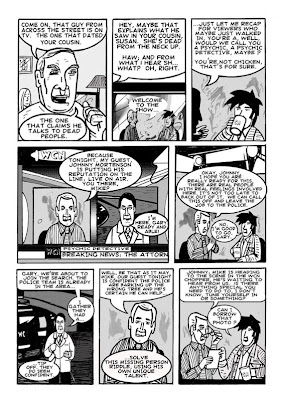 Firstly, that music ap' is great isn't it? I kind of get stuck in a loop and if I have music on when I work I jump from one song to another, and maybe I'll have 3 or 4 favourites, so it pretty much sounds like that here, with those 4 songs looping along, where I am; scanning.

Anyway, I did a longer back story to Johnny Morte and finished the entire first comic, so I'll start posting some of it tomorrow. I'm not sure how much I'll put online; I may put all of it here, and in a pdf for download, I don't know. It depends, very much, on the route I take with the thing.

It's a difficult call deciding what to do with it; especially as any internal debate I may get into can lead to me redrawing the damn thing, obsessively, and maybe never finishing it again. That's because I'd want to make it of a certain "standard" and that standard varies in much the same way that "private art" (art made for a small selective audience) and "public art" (art made for a larger audience) differ - the best work may well be the intimate piece created for yourself and a few others, it may well be more vivid and energetic, and even daring; but the piece created for the big audience, especially a big paying audience, that piece will undoubtedly be more laboured and more practised and much more the finished item.

You would certainly expect the public piece to be judged more harshly, I would think. It will almost certainly be open to more scrutiny than something created just for yourself, and perhaps your small circle of friends. Oh, I'd quite like my own team, a penciller, an inker, a colourist, a letterer, an editor, it would certainly result in a more polished end product, but I'm such a control-freak I don't know that I would respond well to that dynamic. Maybe I would, never say never, as they sometimes say.

So, my comic will, in some respects, be a little rough around the edges, but it will be a little more intimate as a result and hopefully it will be a little more sophisticated looking than your average mini (or at least my average minis). I suppose it will fall somewhere between the two standards, but that's okay, by about the 4th comic in the series I'll be into the swing of it and it'll look better; and at that stage I'll be fighting like billyo to go back and draw the entire first comic again - as you do.
Posted by Rod McKie at 1:57 AM No comments: