I got a note in the post asking for some original comic pages from THE PAST (imagine 'the past' is written all wiggley). There are some examples on the web somewhere, but as you know my Online cartoonist site is down and well, I'm not really sure I'll put it back up.


Anyway, this page is one I quite like, it's part of the introduction of the character Skid Kidd (they called him Mike Kidd, but I tried to smuggle in Mark Kidd, so he'd be SKID MARK - didn't fall for it, though). When I started out, I was drawing with a conventional Parker fountain pen with a very rigid, unbending nib. I knew how I wanted the comic pages to look, and had no idea that I was, at the time, continuing the tradition of Clean Line drawing. Herge's Tintin, is perhaps the best example of European Clean Line drawing, but Heath Robinson's Punch cartoons are another and Winsor McCay and George McManus's comic strip work are superb examples of American Clean Line work.

I spent a lot of time with Beano artist Tom Paterson during this period, regularly thrashing him at Pool and Snooker. Around that time we put our own comic idea, Squelch, together, but it didn't work out and Tom sold his main character The Wet Blanket to the 'Viz for kids rip-off' Oink: 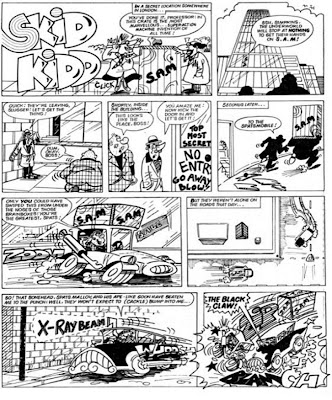