I was just talking to Geoff Hassing (you'll see some of Geoff's work alongside mine in National Lampoon's, Funniest Cartoons of the 21st Century) who was wondering if we all come up with gag ideas in different ways, and I think it's an interesting topic.

I mentioned the gag you can see below, which I think I can maybe only sell to one of my clients; maybe. Here's how it came about, I was working in the wee small hours writing gags and I had a DVD on in the background (bearing in mind I'd recently watched The Illusionist and The Prestige and had even flicked through an old Luther Arkwright comic) of a Phillip Pullman story called The Ruby in the Smoke; which starred Billie Piper of Doctor Who fame. Now 'Ruby' is a period piece, but with modern pacing - which is quite pleasing, and the other movies are also period pieces, and the comic is a sort of Prussian Empire sci-fi piece, like David Lynch's version of Dune, so I was always going to be influenced, to some degree, in that direction.

The UK cartoonist David Langdon, who himself could be called, albeit affectionately, a period piece - once referred to the process of thinking up cartoon punchlines as 'controlled mind-wandering'. I kind of like that, because you sort of do let your imagination run - but not riot.

You see, you have to target certain markets with your cartoons, that's just a realistic acceptance that this is a business, and whilst you want to be as creative and as funny as you can be, you do have to obey the constraints of the publication you are targeting. So for instance, you might be thinking about office furniture and a torture chamber, this train of thought could have been started by a news article, a line of movie dialogue, a cartoon you saw, a joke you heard, whatever, and you will combine these ideas in search of a gag. But you will limit the ideas you can wring out of this scenario depending on how which market it's going to. For instance, if it's going to the Saturday Evening Post, it'll be tamer than it would be if it were heading for the Wall Street Journal and that cartoon would be tamer, and less wild, than a cartoon heading for, say, Playboy.

Whilst controlling your ideas like this might seem a little restrictive, at first glance, it actually works to your benefit in the long run, because you can go on to develop the idea in stages. So instead of beginning with the most 'out-there' idea, and ending up with only one, perhaps difficult to sell, cartoon, you work your way up slowly, and with any luck create a number of good cartoons, suitable for a variety of markets, as you stretch the idea to its wildest conclusion. I suppose it's a sort of humour by degree.

Anyway, I roughed this cartoon out and it was one of a batch I drew up the following day; but I didn't send it because I didn't think it was that funny. However, Geoff likes it and I think I'm maybe coming round. I do think it'll be a good fit for one of my clients; so in that sense it is not a very good cartoon: 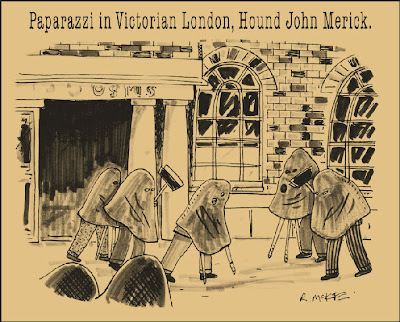 Great gag, Rod. And the "sepia" background and the typeface really add an extra something.

Hi Royston. Many thanks. Hope things are going well down your way. In fact, I'll just pop over.