Virgin on the Impossible

Richard Branson is everywhere at the moment. He is the Northern Rock's 'preferred buyer' (not that we should pay any attention to the financial instincts of the mental midgets that run that bank) but it looks like it's more or less a done-deal, so he's actually going to have a license to print money; which is kind of amusing, in that old trippy-hippy Tubular Bells kind of an ironic way.

It's Virgin comic books that interest us here though, I mean, a new comic book publisher, a new comic book publisher that like most of the others has one-eye on the movie business, it must be a good thing for the entire comic book industry, right? Trouble is, every time you hear a phrase like 'a good thing for the entire industry', it usually only really means that it's a good thing for a few well-placed and well-connected people. It is, more often than not, one of those loaded phrases that means absolutely nothing, on its own, because it is uttered long before any empirical proof exists. To be fair, this belief that it must be a good thing for the entire industry may just be an example of hope over experience, rather than the usual spin that accompanies every single business launch. Who knows? In time Virgin may well throw open its doors and invite, shall we say, a less-salubrious cast of creators into its pantheon and then, perhaps, the phrase will carry some meaning. At the moment, however, I can't help but think that the pool of talent they are fishing in is a very small pool indeed: 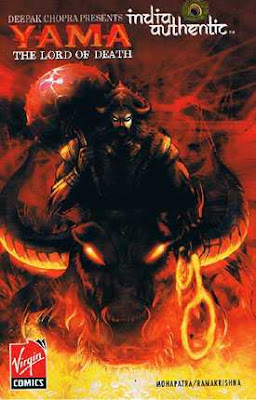 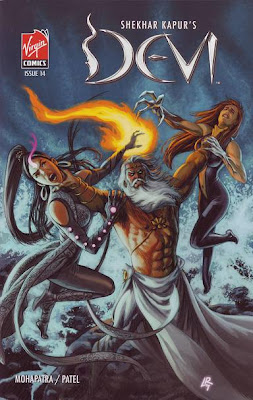 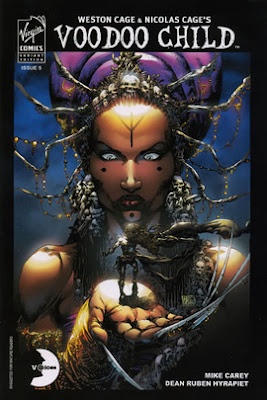 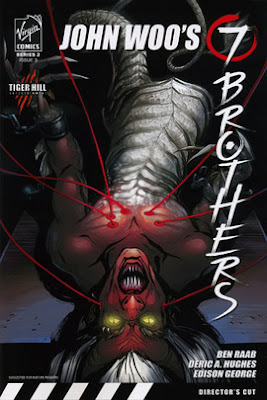 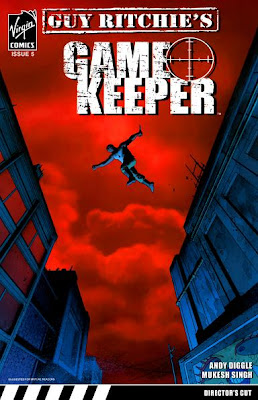 Now, that's a little misleading of me. I am being somewhat mischievous by suggesting that movie director Shekar Kapur, medical doctor, writer and guru to The New Thought Movement, Deepak Chopra, movie director John Woo, actor Nicholas Cage and his son Weston, movie director Guy Ritchie, are actually a small pool of writers and illustrators actually creating comic books, they do have their names on the covers, movie-style, they came-up with the characters, but I think that, in the main, the writing and illustrating of the tales is down to, I presume, work-for-hire freelancers.
This thought, that this is maybe just another 'work-for-hire' comic factory makes me pause, and the blurb that heralded the company's birth, that 'Properties developed will also be translated into full media properties across a wide line of products and media outlets' sounds an alarm bell in my little overworked cartoonist head. In my experience, over the last three decades, companies that produce 'Properties' to 'develop' into 'full media properties' are going to be a lot happier hiring cartoonists and writers to work on their own in-house projects, than just publishing innovative new comic ideas from, heaven forbid, unknown creators.
Perhaps I am being unfair, perhaps I am being suspicious and Virgin Comics may well welcome new submissions and ideas for comic books, just as Dark Horse and Tokyopop and Image do. Time will tell.
Posted by Rod McKie at 2:55 AM