Augh, this year really has been oveshadowed by gloom.

I see from my morning visit to Mike Lynch's blog that the gloom hasn't lifted, but deepened, and that veteran cartoonist Al Scaduto died last week, aged 79. Mike has written a really nice, affectionate piece on the passing of his friend and colleague. 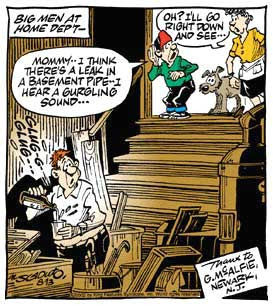 Earlier this month, Australian cartoonist,and the man who single-handedly helped to keep people like me in touch with the wider world, through the OZ cartooning publication, Inkspot, James Kemsley, the cartoonist behind Ginger Meggs, died an untimely death, on December the 3rd 2007, at the age of 59, after a brave battle with Motor-Neuron disease.

Another recent tragedy, and one a little closer to home, was the demise of Stirling-born artist and cartoonist Ged (Gerald) Melling, who died on October 29 2007, as a result of a road accident. Ged worked as a cartoonist and illustrator for The Times, the Sunday Telegraph, the Economist, The Financial Times, the Spectator, The Observer, Sporting Life, Private Eye and The Oldie, which isn't a bad resume for a cartoonist who only took up the profession in his 50s. 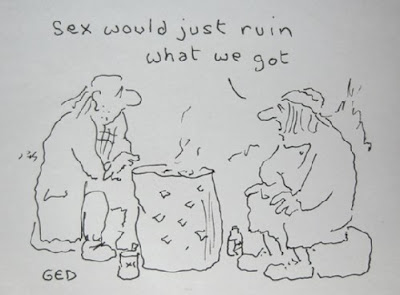