I think I sang the praises of Playboy before now, but I was reading the Sex and Music issue, March 2008, which I have a cartoon in, from cover to cover yesterday, and it really does still stand head and shoulders above the competition. It's a touch of class. Actually, it's more than that, it's the manifestation of a philosophy of declared quality - it has never considered going downmarket, but remained a believer in the aspirations of its readership. That's rare. 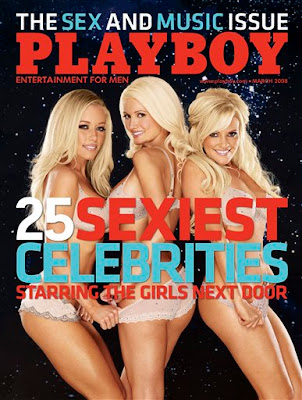 The Girls Next Door are hugely popular over here, including amongst my daughters and they also watch Law and Order, Special Victims Unit, and this issue has a connection with ICE T who plays Detective Finn in that, so I'm really up against it trying to keep the magazine from taking a walk.

They are, as I have said before, a very professional outfit and there is a sense, I feel, that even the cartoonists (and that is a reflection of how some publications make cartoonists feel) are part of the Playboy family.

So, I got my comp' copy, with a Cartoon Department note on it (it's all just very, well, classy, sophisticated), and I began to read, right from the get-go. Not racing in to look at my cartoon, but slowly working my way towards it. Anyway, that's not the cartoon I want to talk about, the cartoon I want to talk about makes mine look very poor by comparison, it's a full-page cartoon by Master-Cartoonist Gahan Wilson. Man, does it look great. What amazes me is how contemporary it looks, and what I mean by that is that given how long Gahan has been making cartoons, you might expect his cartoons to maybe look a little, I don't know, old school, slightly dated maybe? Well, they don't, and this cartoon, if you didn't know anything about its creator, could be by a brand new cartoonist fresh out of an Art College trying a brand new look for the first time; the cartoon looks that vibrant and that new and that contemporary. The only thing that might give away that the cartoonist behind the work is experienced, is the obvious craft and attention to detail involved in the expert execution of the drawing. It really is amazing to look at the seductive sinuey quality of the lines and then take in the counterpoint of the, often, macabre humour. It looks FANTASTIC.

So, one day, hopefully, somewhere down the line, I will manage to produce a drawing I like as much as this cartoon by Mister Wilson. It may never happen, but it gives me something to reach for and ensures that I never get bored doing the same job day-in-day-out as I aspire to be that good - Gahan Wilson good. And if I was in the US this month, wild horses couldn't drag me away from this event: 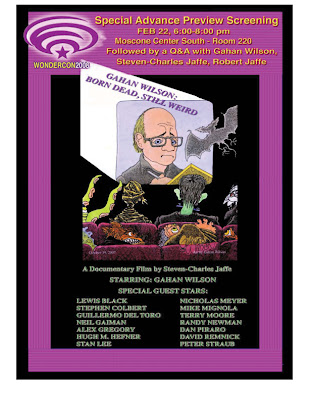