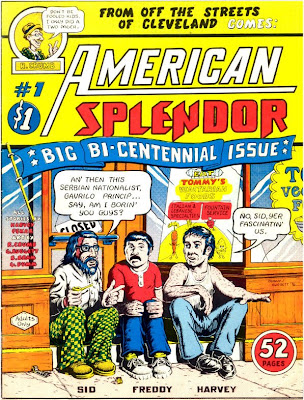 Harvey Pekar's American Splendor, with DC since 2006, has begun a new run of 4 comics with the Vertigo (go get the nifty poster) imprint. It's 30 years and a few publishers since Harvey began creating his masterpiece, and I can't tell you how much joy reading this one brought me, especially since I read it after I suffered looking over some of the most depressing mainstream comics I have ever seen. I'm not exaggerating when I tell you I just couldn't read the things; they were bewilderingly bad - but that's for another post; today we are celebrating the one shining clear beacon amid a veritable sea of wasted paper.
Two things struck me about the American Splendor comic, that it appears to be better value than any other comic simply because so much good observation is crammed into it, and the stories are simply so darned good, grown-up, reading, and I really, really, prefer to see a mixture of artistic styles of the one subject, rather than one 'approved' version. 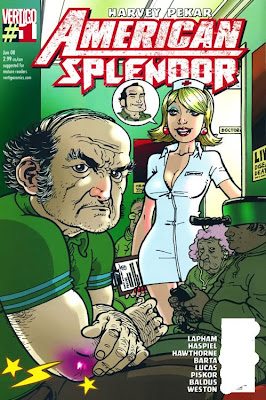 The story I particularly enjoyed though was the one were Harvey teamed with the illustrator Ed Piskor, with whom he worked on the graphic novel Macedonia, (along with Heather Robertson) again, to have a go at the critic who made some ill-informed critiques of that publication. It's a good old Harvey Pekar rant and the man is totally right; graphic novels and for that matter comics too, can be polemics, they can be 'lectures' and didactic and why shouldn't a writer take a position when they feel moved to do so? As Harvey says, 'You can do anything with words and pictures'. 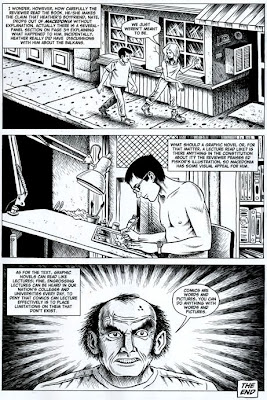 Hi Rob. Thanks for the good words! I'm going to tell Harv about your enthusiastic review. I know he'll appreciate it a lot.

I hadn't heard of the new Vertigo stuff! Thanks!

by sheer coincidence Film 4 which is now free-to-view cable over here showed the American Splendor movie again last night. I have the DVD but watched it again anyway, between bouts of late night drawing.

I thought your AS pages were great. Thanks for looking in.

This AS volume looks excellent, you'll enjoy it.

How's the cartoon collection doing? If I order on the net I can't force you to sign it, can I buy a signed copy from you directly?

If you are interested here are my breakdowns and the finished artwork without the lettering. I sort of wanted to hand letter it but they wanted it to be done by computer.
http://edpiskor.com/kirkus_final.html

That's brilliant Ed, if it's okay with you I'll put it on the front of the blog.