European Comics and the British Renaissance 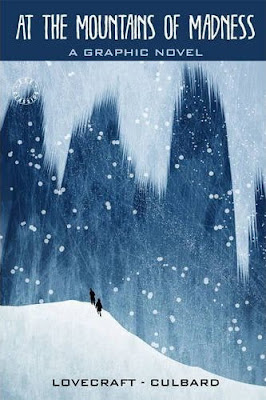 I don't think it's an exaggeration to describe the publication of some recent comic books, or graphic novels on this side of the pond, as at least a sign of the possible beginnings of a British Renaissance; with publishers Blank Slate Books and Self Made Hero blazing the trail. With the release of Ian Culbard's adaptation of doyen of horror H. P. Lovecraft's story At the Mountains of Madness, Selfmadehero has added another title to its library of graphic adaptations, and to Culbard's personal triumphs, which include a complete set of Sir Arthur Conan Doyle's Sherlock Holmes novels, and Wilde's Dorian Gray. With Culbard's distinctive style, which looks like a cross between ligne claire and Batman anime, Selfmadehero are producing work that, I believe, would sit comfortably alongside some of the best Bande Dessinee. 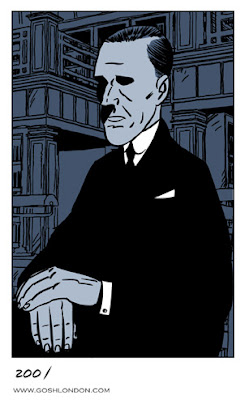 Another adaptation that will soon swell the Selfmadehero ranks, and will surely fatten the section allotted to them on our personal bookshelves, is be Rob Davis's adaptation of Don Quixote, by Miguel De Cervantes. 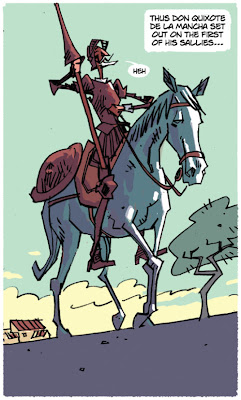 You'll know from my previous blog-posts on adaptations here, that I have some pretty strong views on graphic-adaptations, and I'm very pleased to say that Rob really is my kind of illustrator. That is to say, one who is really interested in, and is familiar with, the text he is interpreting - to say nothing of his endless agonising over line and colour. Indeed, his Dinlos and Skilldos blog and his Twitter feed are a testament to the amount of work he is putting into the delivery of the novel. That attention to the text, and constant theorising about the craft, is also a facet of Ian Culbard's work, and he spoke about it here, on Selfmadehero's site. 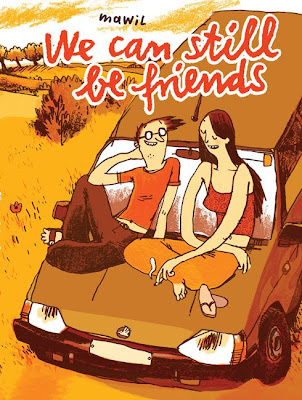 Over at Blank Slate Books, the emphasis is on new original material, and their stable of creators includes European cartoonists Mawil and Randall C. At the moment, many of Blank Slate's titles are more Marcinelle school than Ligne Claire, but that is probably down to happenstance rather than design. Like Selfmadehero, as their catalogue grows, they will no doubt publish a mixture of styles. A statement of their artistic intent, and vision, I think, was their decision to publish Randall C's Sleepyheads in the same oversize edition that was printed in Holland. 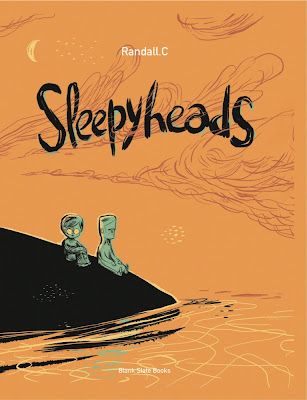 What I hope for from Blank Slate (who by the way make Fantagraphically-beautiful books), and Selmadehero, is that they will one day be custodians of a catalogue of work as varied as that of Cinebook in France. The French company has grown to the extent that it now publishes somewhere in the region of 40 different titles. In mainland Europe, and in France in particular, there is an enormous range of Bande Dessinee, in a huge variety of styles and genres. 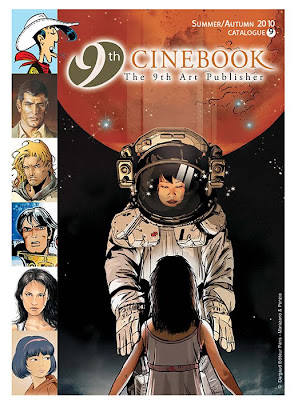 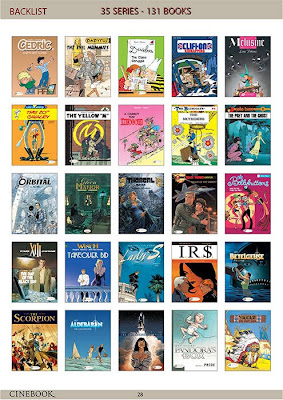 This often comes as a surprise not just to those who were previously only aware of Tintin and Asterix, but even to those more knowledgeable souls aware of Blake and Mortimer, Adele Blanc-Sec, Largo Winch, and Black Sad. Whilst it is true that Bande Desinee are not as all-pervasive in French culture as manga is in Japanese culture, you won't find Bande Dessinee about fishing, for instance, comic books are regarded with great affection as the 9th Art and the sheer amount of titles is still a real eye-opener. 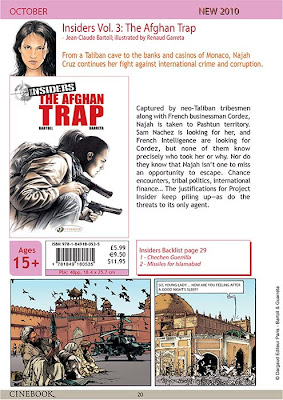 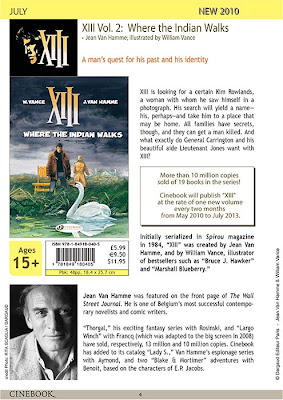 One of the great strengths of the comic book market in France, is that from spy thrillers to vampire tales, and from zombie stories to historical dramas, there is a bande dessinee title for almost every reader. In this respect the French market is almost as varied as that of Japan, and it is in this area that we in the west, in Britain in particular, are sadly lacking either the vision, the scope, or just the imagination, to create fiction that doesn't have some autobiographical basis. While the Franco/Belgian market has the Bourne Identity-inspired XIII, created by Belgium's Jean Van Hamme and William Vance for Spirou before earning its own BD. And while Japan has Takao Saito's Golgo13, serialised in Shogakukan's Big Comic Magazine before making the move to its own massively popular manga title, we in the Britain have only the memory of old Modesty Blaise strips (which French BD readers love). 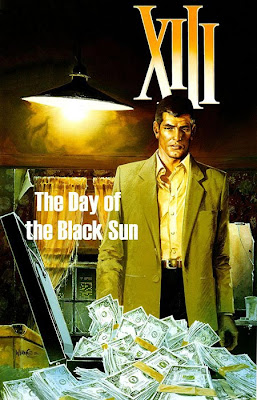 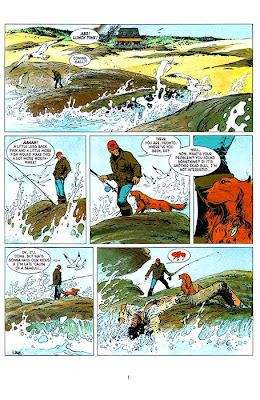 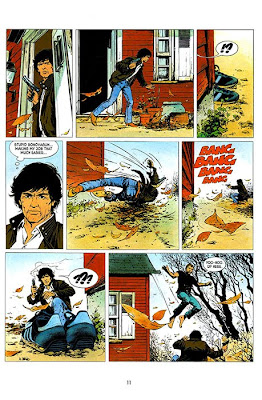 Of course unlike France and Japan we have no studio system in Britain, and we have no anthology publications like Spirou and Big Comic to attract a readership and create a demand for the single titles. That will make a difference, but unfamiliarity with the weekly serials does not necessarily deter the avid comicbook fan. Titles like The Chimpanzee Complex will appeal to fans of comic books and science fiction, even if those readers have never read the stories in serialised form. 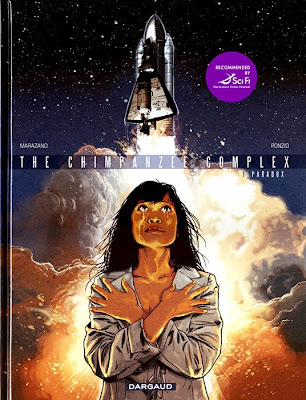 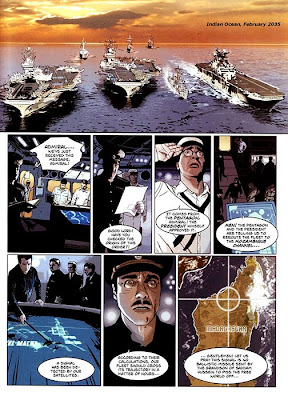 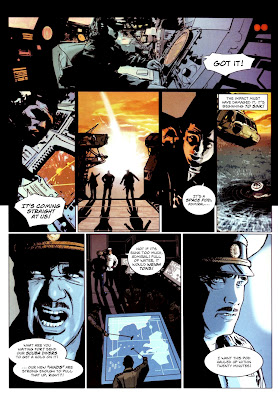 Another reason for publishing modern contemporary fiction in a graphic format is that when a genre, like horror, and like vampires and zombies in particular, becomes popular enough to attract major funding from movie and TV studios, a Britain creator, studio, and publisher, will actually have a product that makes money. Worthy as some of our autobiographical tales are, they are unlikely to attract the sort of audiences The Walking Dead or 30 Days of Night bring in. No doubt though, part of the problem for British creators is where exactly do they try to place a graphic novel, let alone a series of graphic novels, about vampires. Currently, the only answer, it seems, is "in the US". 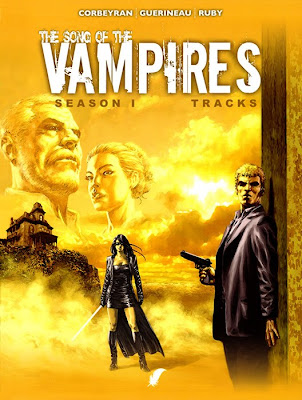 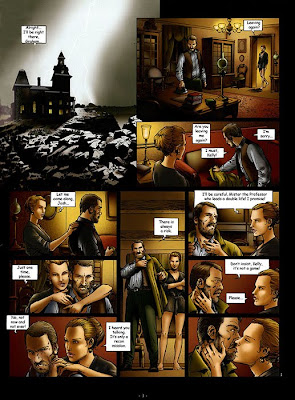 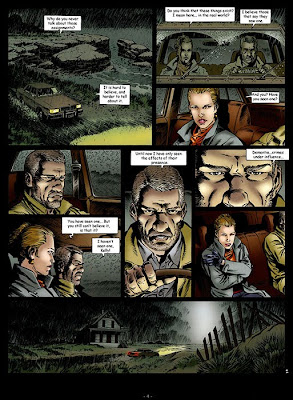 I have always believed that large mainstream publishers in the UK would avoid graphic novels like the plague, because of the way the businesses are run. They will probably be happy too reprint success stories from other shores, but they won't break the habits of a lifetime and invest in new product. With luck, the new independent companies that are bravely stepping in to fill the void will publish some daring new fiction alongside the re-imaginings, adaptations, and autobiographical works - making the new British scene more like the French, with no "mainstream comic book/indie comic book distinctions. And with luck they will be rewarded with some monster hits and monster pay-days.
Posted by Rod McKie at 12:01 PM

Thanks for this, Rod. A lot of beautiful work to look at and most all is new to me. Really makes me want to buy 'em all and dig into 'em!

As usual, Cinebook cheerleaders fail to mention a tiny detail about the publisher: the systematical censorship.

Mike I'll email you about some lovely titles.


Come back here and explain yourself Anonymous; I'm all ears. Remember I'm hoping indy-publishers in the UK ape the success of Cinebook in numbers of titles published. I'm in the dark about their alleged censorship.

Good post - cheers Rod. Like Mike, it makes me want to order the lot of 'em! I've found Twitter to be great for learning about new publishers and comic creators and interacting directly with them. Yes, I thought Rob's recent tweets about his colour choices for Don Quixote interesting and inspiring too. He's a talented guy!

I only heard about the likes of Sleepyheads and the Mountains of Madness adaptation after lots of positive comments from the likes of the Solipsistic Pop crowd (another bunch of talented creators)- probably would have passed me by otherwise. Thanks for flagging up a few other titles I missed - time to head to Amazon and spend a bit of dosh...

It takes a lot to get a cynic like me even remotely excited about cartooning, Tim, but I think I'm getting there. There are some seriously talented people out there. The future is looking a lot more interesting.

Speaking of talented people, I've seen a couple of French comics, adult themes, relationships and stuff, that look a bit like your style of drawing - crossed my mind right away.

Forgot to say - 'Psychiatric Tales' is Blank Slate isn't it? Another well reviewed book that some have declared their favourite of the year. Another to add to my Amazon order...