So I began working on Johnny Morte maybe two years ago?  It has taken this long to get it just the way I want it, and the story has evolved over the period and the look of it has changed.  Visually, it hasn't changed a great deal, but the story is a lot better, I think.  It is a comic, and I do view it as a 'pop project' to fund the other stuff, but it isn't a throwaway project, and I hope the length of time it has taken me to finalise the script and the artwork illustrates that.  I do take it seriously, and I won't let it go until I know it's the best I can do.

Letting it go is the problem really.  For decades now I have had a problem letting things go.  In fact, on several occasions I have supplied magazine publishers and card companies with "second drawings" along with the finished approved work.  This "second drawing" is a "really finished" drawing that I think is an improvement on the one requested.  At no stage, has any publisher used the "second drawing".  But quite recently, I took this obsession with getting things just right, to a whole new level.  I was looking at some old artwork I did in the 1980s, which was in a comic so it's a matter of record somewhere - it's an historical fact in some dusty collection somewhere, and I was going to put it online, and I actually found myself thinking about redrawing it.

Can you believe that?  I mean to say, in what way would that have been authentic?  I was going to post a thirty year old drawing that I drew yesterday. It wasn't as if I was going to re-imagine it, or contemporise it, or make it the way I always imagined it would be - all much more valid reasons for doing it.  No, what I wanted to do was remove the "mistakes" I made back then.  I knew right there and then that I had a problem, and knew what the problem was; I hate anything by me.  I was in danger of being caught up in a moebius loop where I would spend the rest of my life redrawing everything I've ever done every what?  Every 6 months, every year, every decade?  It suddenly became apparent to me that I have been doing this for some time.  Now, a version of this behaviour does have its place in the work I do. In cartooning one often looks back over the old rejects and even the accepted cartoons for new ideas, for a new spin, but that's different, that's re-interrupting the work, making it more contemporary.  What can't be healthy, surely, is being stuck in the frame of mind where one endlessly redraws the same exact idea over and over again, in a futile search for perfection - especially when that time would be better spent moving on and coming up with new ideas.

So here we go.  I'm on page 9 of JM Comic book #1 and very soon I'll have the entire 26 or so pages finished.and it'll wing its way away and it will be "the best I could do at the time" and that is what it will remain.  It's very freeing to set aside a compulsion, it's like stepping outside a moebius strip. 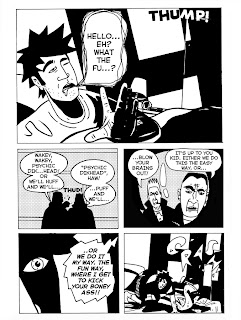 Right click to open in a new window. Clicking on through throws up tiny graphics.
Posted by Rod McKie at 11:25 AM