Okay, so it's a bit of a storm in a tea cup. I noticed the drawing and the Kirby creature registered with me, but I really didn't pay much attention at all. It was only after I followed the links on Dirk Deppey's Journalista blog that I actually paid any heed to the 'furore'. Anyway, I really like Harry Bliss's drawings. I love that strange looking pencil he uses. And, I also know how easy it is to end up with similar ideas, I mean, I'm sure I sent the 3 little pigs cartoon with the pig with the brick house being repossessed to the New Yorker months ago - they didn't use it, but one of their cartoonists did one very similar to mine in the April 28th issue. Of course they could have had that one in the drawer when mine arrived, and that sort of thing happens all the time. I really was certain that the sub-prime mortgage crisis would affect the little piggy much more than the wolf's huffing and puffing - and I wasn't the only one; it seems.


On this occasion though, with Harry Bliss's cartoon, it's a little different. If, like me, and I presume like Harry, you are a comic book fan, you would have noticed something vaguely familiar about the cartoon in the New Yorker caption competition: 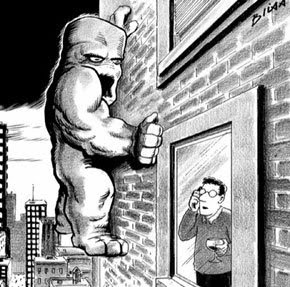 Yup, it's based on the work of the 'King' himself, Jack Kirby - the artist who 'co-created' many of Marvel's greatest comic book creations and breathed life into Thor, Captain America, the Fantastic Four, etc, etc. It is, in particular, a drawing that clearly owes a debt to Kirby's cover to the vintage Silver Age comic, Tales to Astonish # 34: 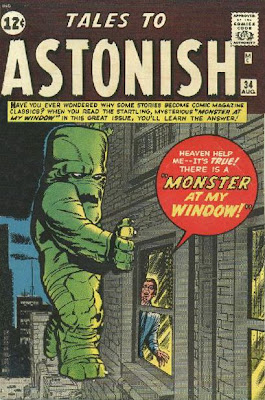 That's the thing though, it is very clearly based on that cover, right down to the buildings in the distance and the ring around the creature - it foregrounds its similarities to the work; it is clearly not trying to pretend it owes Kirby's cover no debt. Now I don't pretend to know what was in Harry's mind when he created the drawing, but it looks like an homage to the King, and Harry Bliss claims it is just that, so I believe him.

If there is a fault here, I'm inclined to think that it was in not acknowledging the debt to Jack Kirby in the first instance, either by Harry himself, or at some later stage by someone else in the magazine. After all, a simple 'after King Kirby' or some such would suffice. That is certainly fairly standard here in the UK. However, the New Yorker's response that they could assume their readers would find a reference to 'Tales to Astonish # 34 'obvious' , may be stretching it a bit - according to their demographic that is. Or has it become the latest object d'geek? No, it looks to me like an oversight, a real blooper, but thankfully one that has now been corrected.

Of course this has drawn unwanted, and perhaps unwarranted, attention to Bliss's output and someone has noticed a similarity between Harry Bliss's cartoon about being referred to a rehab clinic by a publicist, and one drawn some time back by John Rau. 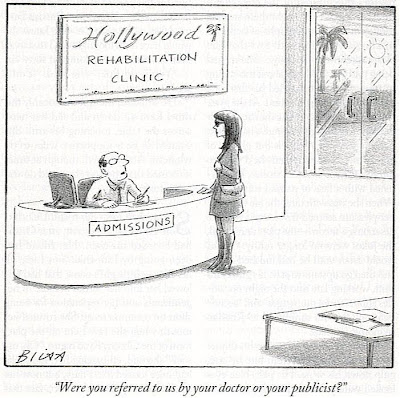 Copyright, this copy, The New Yorker (click here to visit the Cartoon Bank) 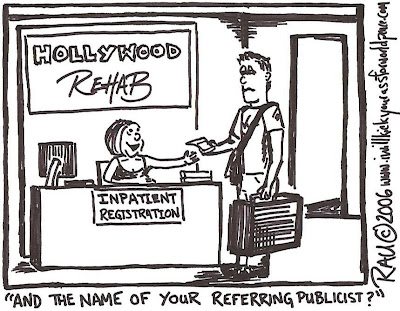 Now I admit it looks similar, but this is surely a little like my 3 pigs cartoon that I mentioned above. Cartoonists can and do think alike. Their wires can cross and let's face it, it's a pretty obvious gag. I've actually looked through the Cartoon Bank cartoons and found a lot of the ideas I think are new, have been done, it's just a case of a subject not having an infinite amount of funny possibilities, I suppose.

I must admit, though, I did become a little perplexed by Harry Bliss's 'I'm with stupid' tee-shirt cartoon from the March 2008 edition of Playboy, after Mike Lynch brought the subject up on his blog. It made me think more about the cartoon, which up until then I had simply enjoyed as a drawing because of its very modern look. Harry has drawn a young male student walking through the campus wearing an 'I'm with stupid' tee that is pointing down to his junk. I actually recognised the t-shirt, vaguely, I was sure I'd seen it before. And I had, there are at least three companies out there who print an identical tee, BuyCoolShirts, Printfection and Jiggy. There may even be more. However, I'm fairly certain they are all certain they came up with the idea too, and I think Mike Lynch attributed the original to VIP (I may be wrong). But then I thought about why I liked the cartoon in the first place. I liked it because it looked like a modern Playboy cartoon, to me. In light of the fact that the t-shirt design isn't invented in the cartoon and therefore isn't really the gag; I don't like it any less. What I enjoy about it then is that almost every male student who turns up at University should wear a t-shirt reminding them they are with stupid and who stupid is, in the first two semesters, at least.

It's also worth pointing out here that 'I'm with Stupid' is, like the desert island and the visits of Death, a familiar cartoon theme, or trope, that is still fairly common in cartooning circles. The Harry Bliss cartoon here, from the New Yorker in 2004, where one gravestone is pointing at another and has 'I'm With Stupid' as the legend on it, establishes it is an idea he plays with often. And I think the fact that Bruce Bolinger's undated cartoon here at Cartoonstock (scroll down to 'I'm With Stupid, Cartoon #9'), which is also a cartoon with one tombstone with 'I'm With Stupid' pointing at another, is just another example of how when you have a popular subject and you have a lot of cartoonists out there 'thinking', they can come up with very similar ideas.

There's probably a maxim behind this that if you give 100 monkeys an infinite amount of time they can programme a virtual world where all the cartoonists will believe they exist and they will all have the same ideas randomly forever - or something to that effect.

The New Yorker bought the cartoon without a caption. Why? Because, Neil Gaiman couldn't think of one. Huh? That's right. Harry Bliss emailed the comic writer asking for a caption to "his drawing."
Hmmm.
See http://journal.neilgaiman.com


How odd. I take it he knows Neil Gaiman.

I see. Well, the problem was solved by the NYKR slinging the thing in the caption contest without it actually having a punchline.

Dan Collins, whose own Kirby homage Captain Hardon is published by Fantagraphics, was wondering what the actual punchline was - apparently there isn't one.

I have a question about this post. Will you please email me at perrylmadison@gmail.com when you get a chance. Thank you.