The origins of the Graphic Novel 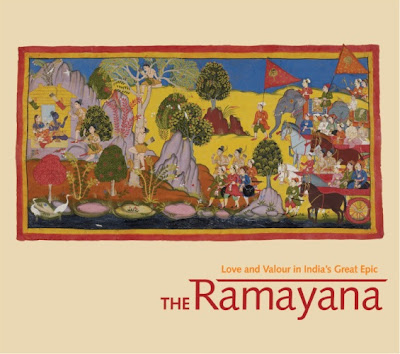 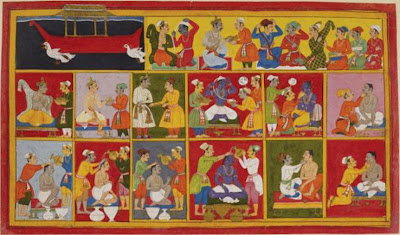 Earlier this month, pages from one of the most gorgeous and lavishly illustrated manuscripts of its time, the Sanskrit epic, The Ramayana (Rama's Way), were put on display by the British Library. You can view it online with Silverlight, available as a download at the site (pics below): 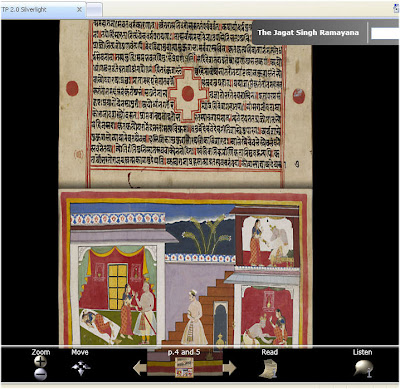 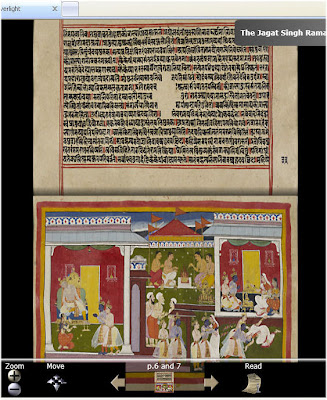 Some four volumes of this masterpiece, were given to Lieutenant-Colonel James Tod, the Scottish-born historian of the ancient Hindu royal warrior clan the Rajputs; by Rana Bhim Singh of Mewar. Colonel Tod took the volumes back to London with him in 1823, where they were acquired by the British Museum, which later gifted the volumes to the British Library. Since 1844, until now, they have been hidden away, stored in bound volumes, and made accessible only to scholars. Which is criminal, isn't it? 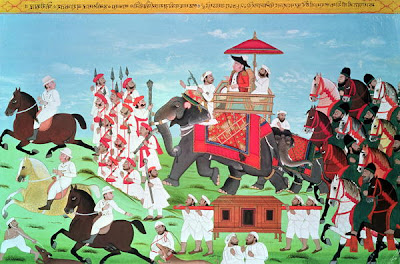 Tod, lording around on an elephant.

There isn’t too much about the manuscript in the newspaper articles, except to say that it was commissioned by Rana Jagat Singh, who ruled over Mewar in north India from 1628 to 1652 and it was the work of several artists including the greatest of all the 17th Century Mewar artists, Sahib Din. But they did, to their credit, use it as an opportunity to print some of the illustrations. However, according to Vidya Deheija's, The Treatment of Narrative in Jagat Singh's Ramayana: A Preliminary study, Jagar Singh's master artist Sahib Din, himself a Muslim, who headed the imperial workshop at Udaipur, was responsible for the paintings of two of the seven books that comprised the manuscript, the second book, Ayodyakianda, and the sixth book, sahibadi citrakrtam.
Containing more than 400 beautifully crafted and vividly coloured paintings, the manuscript, one of the most heavily illustrated editions of the Ramayana ever made, copied in seven large volumes in 'nagari' script, by Mahatma Hirananda, is the only one to survive from Rajasthan from this period.

Set in northern India, around 1200 - 1000 BC, The Ramayana is a poem containing 24000 verses, or Sanskrit couplets. Although it was it written down around two thousand years ago, by the poet/sage Valmiki, the Hindus, with their strong tradition of oral story telling, had kept the story of Prince Rama's epic adventures, viewed as it was as a history of the Mewar house, alive for many centuries before then. 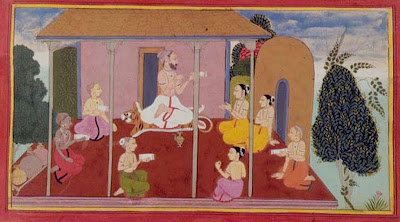 The poet Valmiki reciting The Ramayana

The Ramayana tells the story of Prince Rama (considered to be the seventh incarnation of the god Vishnu) and his wife Sita (considered to have been a human incarnation of the goddess Lakshmi). An heroic figure, Prince Rama's mission in life is to fight evil, and his story begins when the former King Viswamithra takes him, along with his brother Lakshmana, from his home in Ayodhya to the Sarayu river for a sacrifice ceremony. The place is haunted by demons, until Rama kills the main demon Thataka, with his bow and arrow. Afterwards, he is taught by Viswamithra to use the asthras, the divine weapons. 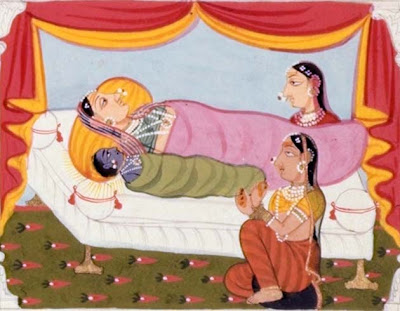 The birth of Prince Rama

Many adventures later, including bringing life back to a woman cursed into stone, the adventurers arrive in the town of Mithila, where Rama falls in love, at first sight (this is inevitable because Rama is an Avatar of Vishnu and Vishnu and Lakshami take human form at the same time and are destined to be together), with the King’s daughter, Sita. However, because of a pledge, Sita is to be married only to the man who can lift, bend, and string the giant bow of Shiva; a task Rama not only performs but outperforms by breaking the bow. After the couple are married, Rama and Sita return to Ayodhya, where the King Dasa-ratha, Rama's father, announces Rama his successor.

The night before King Dasa-ratha hands the crown over to his son, Prince Rama's stepmother, Queen Kaikeyi, her ear poisoned by her hunchbacked servant Kooni, informs her husband that it is time for her to collect the two wishes he promised her; and she wishes him to exile Rama to Dandak's forest for 14 years, and to crown her son Bharata in his place. As promises are honour-bound to be kept, and despite his father's pleas not to go, Rama accepts his exile as duty and prepares to leave. Meanwhile, Bharata, disgusted with the intrigue of his mother, promises to act only as regent until Rama's return, and for the next 14 years refuses to enter Ayodhya.

Joined in exile by his wife, and his brother, Lakshmana, Prince Rama encounters many strange beings including Jatayu, the Great Eagle, Sugreeva, King of the monkeys, Hanuman, the great monkey General, Jambavan, King of the Bears, Kumbharkarn, Ravana's giant brother, Indrajit, Ravana's warrior son, Kamavalli, Ravana's sister and in reality the female demon Soorpanaka, Soorpanka's army of demons, and as a consequence of their encounter with Soorpanaka, her brother the demon king Ravana, overlord of the seven worlds. It is the ten-headed demon King, Ravana of Lanka, who steals away Sita for his own. 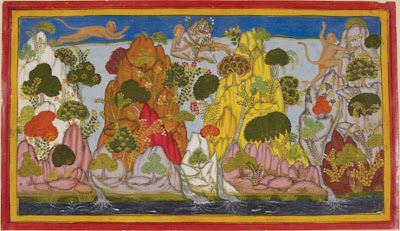 On his quest to find his wife, Prince Rama spends time in the land of the Monkey race, where he encounters the great Monkey General, the Monkey god Hanuman, and the new King of the monkeys, Sugreeva, who promise to help in the search for Sita. After visiting Bear Kingdom they also enlist the help of Jambuvan, King of the Bears, and all the Bears join the search too. The army of rescuers is lead by Monkey General Hanuman to the Demon Kingdom of Lanka, an island in the middle of the ocean, where Sita is held prisoner. Because Hanuman is the son of the Wind God, Vyu, he is the best at jumping, so leaps all the way over to Lanka where he delivers Prince Rama’s ring, to Sita. Although he is caught, Hanuman outwits the demons and escapes by leaping back to Rama. 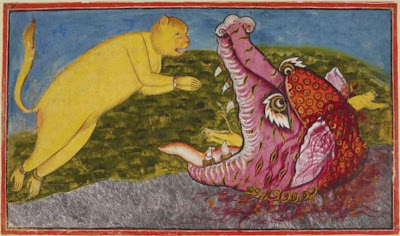 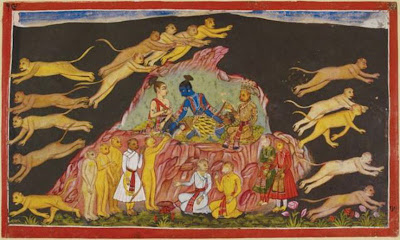 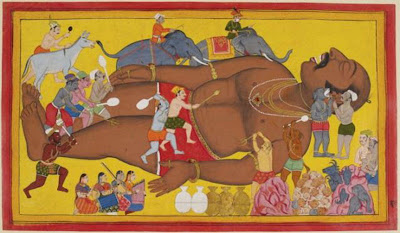 An epic battle ensues after the army builds a causeway, with the help of a golden mermaid queen who lives at the bottom of the sea, to cross the ocean to the island, where Hanuman's troops meet Ravana and his demon army in battle. 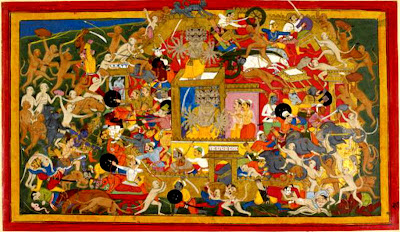 Lakshmana is so badly wounded in the battle it seems that he will die before sunrise unless Hanuman can leap to the Himalayas and bring back the healing herb from the Medicine Mountain to save his life, which he accomplishes by carrying the mountain to Lakshmana and capturing the Sun itself. 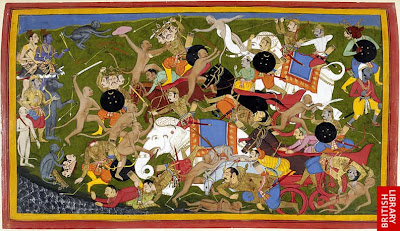 Rama and Ravana fight using the divine weapons that Viswamithra taught Rama to use. Whenever Rama cuts off one of Ravana's heads, t falls to the ground, and another head grows back in its place. However, triumph he does, and afterwards the Monkeys and Bears run through the ruins of Ravana's palace to find Sita and she is set free to scenes of great rejoicing.

When Prince Rama tells her he cannot embrace her because she has slept in the house of another man, Sita proves her innocence by throwing herself into a funeral pyre, after praying to the fire god Agni not to burn her if she is telling the truth. After she emerges from the flames that turn to flowers, unscathed, Prince Rama embraces her.

Hanuman leads the band across the causeway and when they get to the other side the bridge sinks down under the sea, leaving a trail of rocks jutting out in the sea towards Lanka (much like Ireland’s Giant’s Causeway, I suppose). The band then walk across India, and on the way people came out of their houses and place little lamps on their doorsteps to light their way. More and more people light lamps, and the band follow the trail of lights, home. This is still celebrated today in the Festival of Lights; Diwali - where people celebrate light in the darkness, placing lights in their windows to welcome Sita/Lakshmi, wealth and prosperity, into their homes.

At the very end of their journey, the couple fly into Ayodhya in the Puspaka, an aerial car borne by four birds (see painting up top, top left), which was stolen by Ravana from its original owner, Kubera, the god of wealth, where they are proclaimed king and queen; thus inaugurating Rama's rule (Ram-raj) and a golden age for mankind.

Because I don't want anyone trying to engage me in a debate about what ‘sequential art’ or 'narrative art' or a 'graphic novel' is, I shall refrain from commenting on the fact that the paintings clearly form a narrative in a sequential structure, often in guttered panels, or one highly sophisticated and elaborate gutter-less piece, that allows even one who cannot read the accompanying text to 'read' the story. You can decide for yourself whether or not the roots of the graphic novel were planted in India sometime between 1628 to 1653.

If you can find it, you might want to read, The Treatment of Narrative in Jagat Singh's "Ramayana": A Preliminary Study , Vidya Dehejia , Artibus Asiae, Vol. 56, No. 3/4 (1996), pp. 303-324 (article consists of 22 pages). Published by: Artibus Asiae Publishers; Museum Rietberg Zurich, the museum of non-European art of the City of Zurich, Switzerland.

Labels: Dawali, Ramayana, The Origins of the Graphic Novel

Rod - the roots of most things were planted in India :*)

Hey Euphrosene, you may well be right. We certainly wouldn't be on the computer today without the Indian invention of the number '0' (zero) - no zero, no binary code.

As a writer you will have spotted all the elements of the story that appear in later western myths:>)

What struck me instantly, on reading it, because I have been drawing The Giant's Causeway in Eddie and the Banshee of late, was how like that feature the causeway built to reach the island of Lanka was.

I'm doubly intriuged because I have seen an ancient Pictish stone in the Highlands that has figures that look like Sanskrit on it.