I'm always amazed when someone enjoys one of our quirky little British strips, even someone as knowledgeable about comics as Chris Duffy. While I was scanning my Flook stuff for him, I started to wonder if he will like what Flook morphed into as much as the early Flook episodes he likes. The little booklet I have, single -strip size, is the complete Flook and the Peasants' Revolt which was written by Barry Took and features then current political figures like Michael Foot and Enoch Powell, alongside historical figures like Wat Tyler. It features a lot of puns, jokes about The Arsenal and of course given that it appears in the Daily Mail it features Labour politicians and the Trades Unions as trouble makers. It is also a more polished looking strip as Trog had really filled his drawing boots by then, but for me the drawings had lost a lot of their earlier appeal. 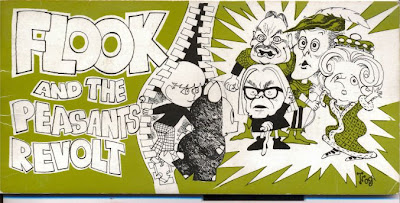 The book interested me at the time because I'd never seen a single-strip sized book, it's about 6.5x3.75 inches; and as you can see it cost the princely sum of 35p. Although it is recorded as No1, I don't think they made any more. I have to say I really prefer strips in the format Titan used for Garth (post is somewhere on the blog), with 4 or 5 episodes to the page, but it's nice to have this.

The Flook at 30 booklet was put together by the Centre for the Study of Cartoons and Caricatures at the University of Kent, by the then Director, Graham Thomas and since it is made up of anecdotes by those involved there are inconsistencies in the histories and that has been left unedited, which actually makes the thing a much better read. The articles were collected by Keith McKenzie who at that time was the Art Editor of Associated Newspapers, publishers of the Daily Mail, for an exhibition of Flook work. 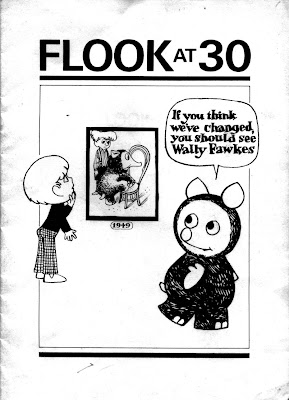 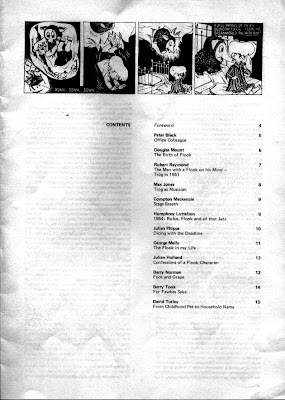 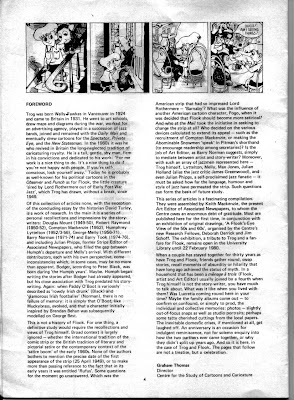