Dudley Watkins Addendum (but added to the top, as it were).

The Dudley Watkins piece below is one that I have wanted to post for some time, and I wanted it to have a little extra because I really believe we are talking about an exceptional cartoonist, but I really didn't know what that "little extra" would be. Well, as luck would have it, two cartoonists who you will all be quite familiar with have given me permission to reproduce their posts on a simultaneous discussion we are having in another place on this piece on Dudley, and I couldn't be more pleased. I'm particularly delighted with Steve Bright's anecdote about Dudley's Crucifixion painting, the Dundee Courier's heading is hilarious.

As I'm sure I've mentioned, Rod, I joined DCT just two weeks before Dudley Watkins died. As an 18 year-old junior, I was given the wonderful job of sorting through all the old Broons and Oor Wullie originals for dating and re-printing purposes. I shared this job with two other kids, Morris Heggie and Euan Kerr who, of course, went on to edit The Dandy and Beano respectively. The artwork in the flesh was staggering and some of the storylines unthinkable in this day and age. (Stopping for a smoke on the way to school and a black kid called Sambo moving into the street). I still feel privileged to have done that job.

As another DCT 'kid' of a slightly younger vintage than Messrs Kettle, Heggie and Kerr (the boys done well!), I joined the company several years after Dudley Watkins death, but of course, his legacy and influence on the comics I worked for was still very much alive and plain to see.

I'm particularly pleased to see you make the point about how much he improved over the years, and that not all great cartoonists are born. I can only think of a few who appear to have been the real deal from Day One (the third of Watkins successors on the Broons and Oor Wullie, Ken H. Harrison, being one of them - consistently brilliant throughout his career). Rather than the "solace" you write of, to be taken from those early Watkins years, I'd hope those of us who struggle with our own early years (I was certainly one) can take inspiration from DDW's work, although I agree that usurping the master at his peak would be nigh on impossible. Perhaps I lack that particular ambition, but I still delight in seeing the evolution of the greats (and Baxendale's growth was perhaps an even more marked contrast), and take inspiration from that. And hopefully I never stop learning and improving, but my target has always been to be half as good as those greats, and I've never looked to better any of them.

I turned down the opportunity to take on The Broons and Oor Wullie back in the 80s. At that time, they were being ghosted by Tom Lavery, a fine comic cartoonist, but struggling to fill the great man's shoes. He had a thankless task. I was very flattered to be asked, but scared stiff at the prospect. I'd have taken on Oor Wullie, but the Broons was way too daunting, with something like ten family members in most frames. But both came as a package deal, so I declined. I was right to do so - I'm not good enough to do it justice now, never mind back then, and the artists who eventually took it on (Pete Davidson, Ken Harrison, then Davidson again) were far better equipped to do the job than I ever will be.

Interesting to read about Watkins Biblical ambition. Only last year, a rather curious depiction of The Crucifixion, drawn by Watkins over 50 years ago, was discovered in a house in Fife where it had hung for decades, having been given to the house owner by Dudley Watkins as a personal gift in 1951. Unmistakeably in Watkins' style, it shows children in contemporary clothes and hairstyles of the 1950s, queueing up at the foot of the cross. It caused quite a stir in the press at the time, but DCT's own headline was typically understated. 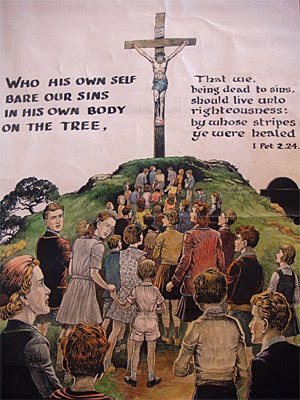