Matt and Sammy's Treehouse of Ergot and Horror

You'll know by now that I like anthologies. As I've said before, I grew up with them because UK comics were and still are, in the main, anthologies. So it will come as no surprise that I really like Bongo Entertainment, Inc's annual, The Simpsons' Treehouse of Horror. But what might come as a surprise to you, with this edition #15, is just exactly who has edited, written, and drawn this collection. It would be fair to say, I think, that it is a stellar line-up of creators; and at least three of my favourite cartoonists are involved.

Guest edited by Sammy Harkham, the award-winning creator of the Kramers Ergot anthology, and featuring the work of a good few of that publications line-up, The Simpsons' Treehouse of Horror #15 features comics by some of the brightest stars in the idie-comic universe. With an eyegasmic cover by Dan Zettwoch the comic opens up to reveal such a range of talent that it really does require two or three passes just to take in, on a superficial level, the delights on almost every page. The impressive collection consists of Cloud 13 by Tim Hensley, The Call of Vegulu, written by Matthew Thurber with art by Kevin Huizenga, Blurst Agin, by Jordan Crane, Mo' Bodies Moe Problems, written and coloured by Ted May with art by the collection's editor Sammy Harkam, The Gods Must Be Lazy, by Will Sweeney, C.H.U.M, by Jon Vermilyea, Boo-tleg by Ben Jones, Three Little Kids, by John Kerschbaum, Bad Millhouse, by Jeffrey Brown and The Slipsons, by C.F 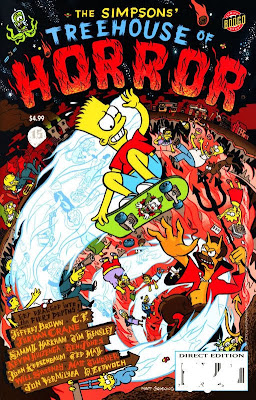 Perhaps the best introduction to the cast of creators, though, comes from the pen of the Editor himself, and I'd like to see more anthologies add this sort of illustrated calling card to its pages. 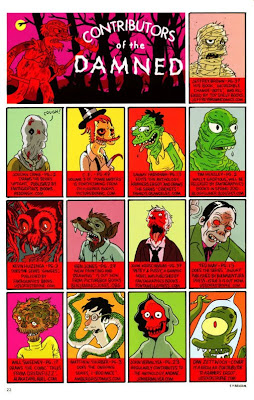 As with any anthology I have my favourites and not every story works for me, but then that is the appeal and the attraction of anthologies, isn't it? There is something for everyone, and I have to say, this collection comes very close to being pretty much perfect; for me. 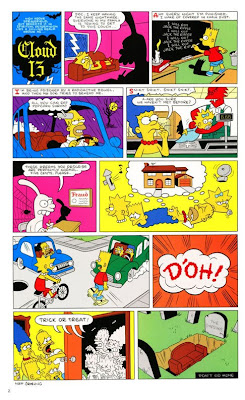 The Call of Veula, for instance, was always going to work for me because it's drawn by Glen Ganges creator, Kevin Huizenga, whom I rate very highly as an illustrator. I just love his work. 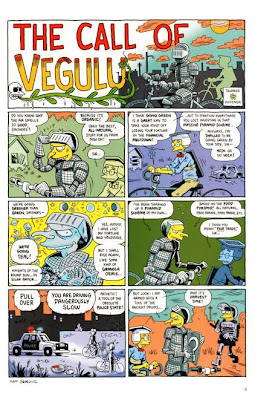 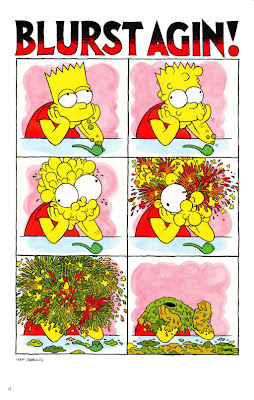 Almost every piece of this works, and the stories are all very good. It has clearly been a job that everyone involved enjoyed taking part in, and it really is very nice to see such a variety of drawing and colouring styles and methods under one cover. 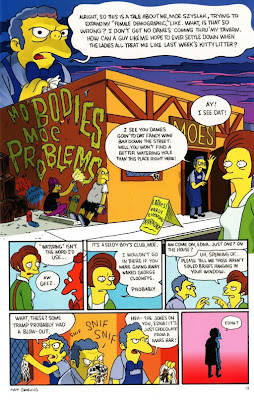 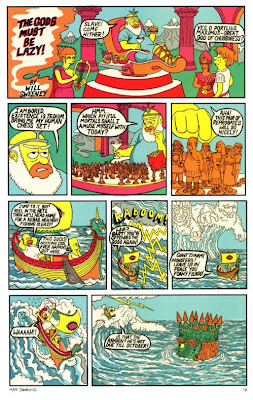 One of my favourite stories from the collection is C.H.U.M by Jon Vermilyea. I like everything about this story, I like the story itself, the drawings and the colouring. 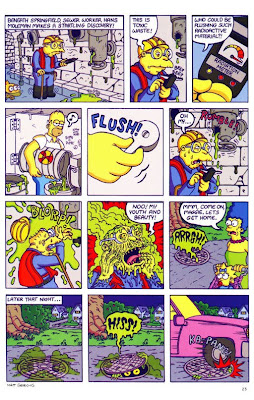 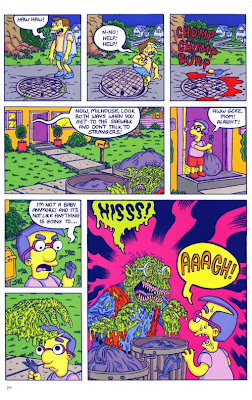 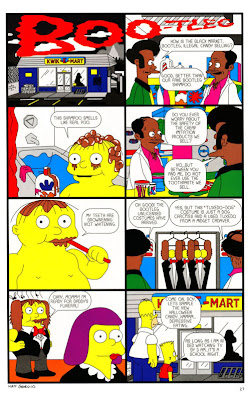 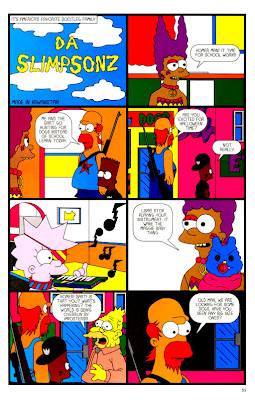 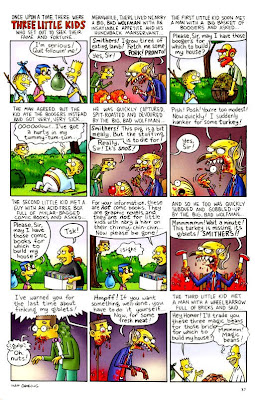 Another real favourite of mine from this collection is Jeffrey Brown's Bad Millhouse (nice detaills about creating the piece on Jeffrey Brown's blog). I just love the way the condition of the characters deteriorates, in a sort of nod to Juni Ito, but is also reflected in the darkening of the felt tip pens as they themselves begin to deteriorate. It is beautifully drawn. 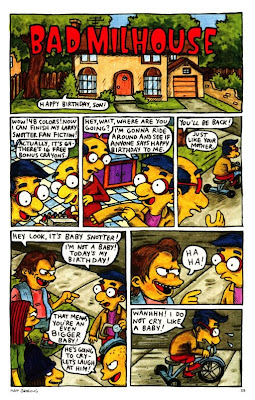 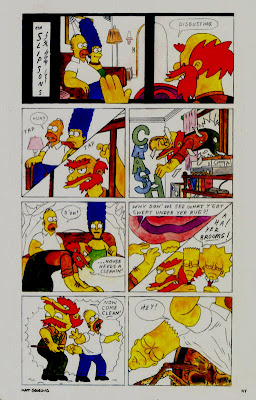 The comic book itself is full of lovely touches that you don't pick up on at first, like Sammy Harkham's deserted couch with little bits of various Simpson's characters littered around the scene of the crime. It's a delight, a real Halloween treat. This is really worth buying.

Some of these look like they were drawn by children. Is this the best they have to offer. I don't know why you like the comic.

I have to say all the comments I've read on Twitter and the like have been positive, er, anonymous. Is yours a serious criticism?

I like the comic. You don't like it, or don't like what you've seen of it. That is all there is to say. Except buy another comic.

I agree with anonymous. This looks junky and infantile. Pass.

Two anonimi. Hmmm, this keeps up I'm going to have to moderate again.

Rod, I've been "away" from comic book work for some time (my last was drawing the Back To The Future series for Harvey), but occasionally I'd try to find a way into the Simpsons market. Never could get a reply. I love the show and the mags, though!
Now I'm reviving my comic book career. Maybe Homer and Bart are somewhere in my future...

I don't see why not, Nelson. I think this annual looks like fun but if you asked me to improve it in any way, I'd have added some gag cartoonists as writers, and or illustrators, just to add to the funny.

Some of them looks okay-drawn, some very-good, some lousy. The only really lousy drawn story has got to be "The Gods Must Be Lazy!". It's... not very well done. Though I really like the very off-model style in "The Slipsons", I don't really get why, since it looks like some weird pencil drawings. As for the best storyline, I would say "Boo-tleg". The satire in it is great, but this issue contains some unusually disgusting toilet humor. I'm not saying I'm against it, it just makes oneself feel a bit uneasy...