You know, I've been working on a semi-autobiographical story for a while now, years actually, and it isn't really autobiographical - it just has bits of my experience creeping into it, which is inevitable. It's quite a large work and it features a lot of local history about Leith and Gilmerton, but I'm hoping it'll appeal to a broad readership. It has been through a number of incarnations, but it's finally starting to take shape.

Anyway, I noticed while I was working on it that I am not too happy about engaging with the period I spent my formative years growing up in, the era when I hit puberty, the 1970s. It's odd, the 50s are nicely retro, the 60s are always cool (bit selective memory there), the 70s though, the 70s were, I think, generally naff. Nobody appears to have existed in them, outside the Top of the Pops studio, or that appalling talking Tank-top show featuring Demi Moore's newest husband.

It certainly seems to be an era that most cartoonists want to forget, possibly because all the really cool cartoonists either swaned around Haight-Ashbury in the 60s, or got born in the 80s. I mean, I know nobody wants to admit voting for Thatcher in 1979, but before she came along the 70s were, well, interesting.

Like a lot of the people I grew up with, I changed practically overnight from one of the herd who wore the bovver boy fashion of the day; inspired by the movie version of A clockwork Orange (not having actually seen the movie made no difference), into one of David Bowie's legion of peacock-coloured fans. I think the Bowie thing scared my parents a lot more than the 'yobbo' faze. At any rate, I thought I'd knock off one or two comic pages about that period, even if they are a little embarrassing.

PS: My other theory is that most cartoonists were what we called 'spares', 'nerds' in todays parliance, and they would rather forget that part of their past. 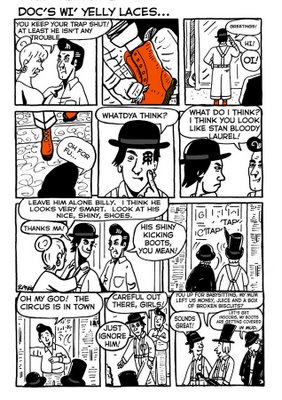 I like what I 've seen so far Rod. I was born in '67, so I guess the early 70's kinda passed me by while I read the Beano and played with Action Man.
My frame of reference always seems to be music (what was I listening to in that year, where was I when I first heard that tune? etc) - I would say I'm equally obsessed with music as I am with cartooning. Started really getting into music around about '79 (XTC yay!) though the 80's did nothing for my musical taste (I still like Howard Jones, so there's no hope for me)

Anyway,
Excellent page, and I look forward to seeing the finished work whenever it appears.

Great use of colour BTW