Is This Blatent Copyright Infringement?

I read the Independent every day now. I find it more informative and entertaining than the Guardian. The artwork in the paper is shite, but the Gruniad is the same. What especially annoyed me about the Guardian was its habit of publishing no new comic strips or cartoon work, unless it was wrapped around a fawning 4-page review, or a 'scholarly' article about how comic books are now also for grown-ups - but not the grown-ups who read the Guardian, unless they are safely embedded in an article on comic books. How post modern. 'Sigh'. Well, the Independent now has one strike against it for its beautifully illustrated article on the work of Sempe. The Sempe drawings were like a little oasis in the graphic desert of the awful comic strip, the ill-thought out illustrations, and the obvious editorial cartoon in the Indy itself.

It was however, The Independent's weekly Media Section from Monday, October 23rd 2006 that really got my blood boiling. Guy Adams's (proper) Media Diary is the usual irrelevent waffle about the self-absorbed, but it led this time with a little puff piece about poofs, clevery using the word 'gay' in a number of ways (yuh huh). The theme was carried over to the illustration that accompanied the article which was by clearly one of Tom of Finland's iconic gay men drawings. Double Take: It's signed 'Castro'...Oh, word balloons...An Homage..?No, there's the signature 'Tom'. What the blazes is going on? 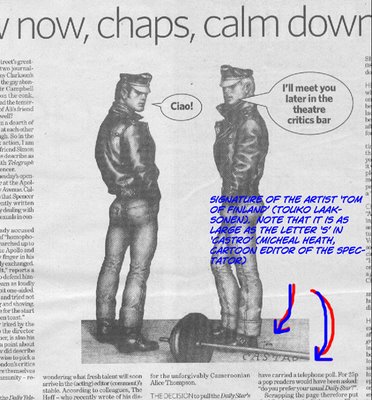 Well, here's the thing. This 'illustration' is by Michael Heath, the cartoonist and Cartoon Editor of the Spectator, or at least the 'funny' word balloons are. The drawing is actually by the word famous illustrator Touko Laaksonnen, who used the psuedonym, 'Tom of Finland' (May 8, 1920 – November 7, 1991) .

Now, I suppose I am as guilty as the next cartoonist of 'adapting' the work of others, whether consciously or unconsiously. But the 'cartoons' of 'Castro' have galled me for some time. Not just because 'Castro' must surely be the Cartoon Editor of the Spectator's favourite cartoonist (I counted 10 in one issue), but because I think Castro's method is at the very least an unfair use of other people's work.

As you would expect, I take the copyright of artwork very seriously, heck, I survive because of it. For that reason let me do something that the Independent couldn't do because the drawing it produced must have been a high-resolution (300d pi plus, in order to fit on its page):

My own use of this piece of artwork comes under the term 'fair use' in order to show an example of the work of this artist in this article. It is believed that the use of low-resolution images of works of art for critical commentary on the work in question, the artistic genre or technique of the work of art, or the school to which the artist belongs, qualifies as fair use under copyright law.