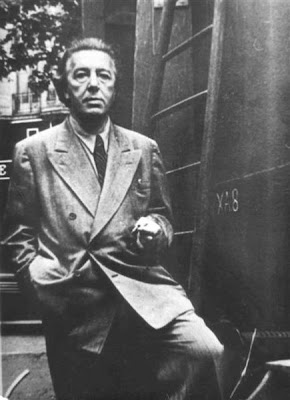 No, not the words of Rumpelstiltskin, the opening sentence of the book Nadja, by the author of The Surrealist Manifesto, Andre Breton. 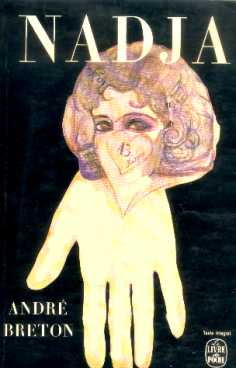 Perhaps my life is nothing but an image of this kind; perhaps I am doomed to retrace my steps under the illusion that I am exploring, doomed to try and learn what I should simply recognize, learning a mere fraction of what I have forgotten.
I'm a big fan of Art Spiegelman, who is a big fan of Breton and who took the idea of the parlour game that Breton and his Surrealist chums played, The Exquisite Corpse, and turned it into, what I thought was a very disappointing book, The Narrative Corpse.

The parlour game, The Exquisite Corpse, involved the person who starts the circle writing an opening sentence at the top of a piece of paper. They then hand the piece of paper on, and the next player writes a sentence to follow on from the first. The piece of paper is then folded so only the most recent line of text is seen by the next person who writes a sentence to follow on from that, and this carries on until all the players have added a line of text. Once the final person in the chain has added his or her sentence, the thing is unfolded and read as a complete narrative.
Art Spiegelman's book, The Narrative Corpse, published by Gates of Heck, features sixty-nine well-known cartoonists who each drew three panels featuring a stick-figure, based on only the previous three panels. The results were, patchy.

Oh yes, the point, well, the point is that a bunch of people from TCJ Forum have resurrected the idea, once again, of producing a version of The Exquisite Corpse, but one that differs from Art Spiegelman's project and yet still manages to hold equally true to the Surrealists goals of transformation, of a constant state of change. Whether it will also hold true to their goals of cooperation and humour will unfold in the fullness of time - but the signs, I think, are good.
"How can we retain from waking life what deserves to be retained, even if it is just so as not to be unworthy of what is best in this life itself?"
This Exquisite Corpse will take a year or more come into existence, and involves each player creating 1 or 2 pages of artwork, and forwarding only their last panel to the next cartoonist in line, who will then create his or her 1 or 2 pages of artwork and forward only their last panel. It has, I feel, more of a chance of becoming an unconscious collage, than The Narrative Corpse did. That is, of course, providing it manages to survive the curse of Ray Tan (the mysterious Comics Journal Board member who made the first Corpse disappear).
The very brave and talented, and some might say foolhardy, Luke Przybylski, Eric, and Aeron Alfrey, are doing the hard work of rounding us up, and Eric is also keeping us in shape and up-to-date. Make no mistake, it's a bit of a task.
The Corpse Players

Doesn't the question come down to: whom do I haunt?

Oh, probably. One of my old lecturers, Nick Royale, who was fond of studying 'the uncanny' in literature, loved to point out that most books are a communication from the dead.

Oh Andre, nice blogs. I really like the Frank Pé portraits. I was looking at an old comic featuring Fireball XL5 and Stingray recently and the illustrator had drawn the characters not as puppets, but naturalistically. I was particulary taken with the way Brains looked.

Thanks, Rod! But I'm confused... Who is Frank Pe? (Well, now I know, having just googled him, but I'm still not sure how that applies.) I suppose you're referring to "Piners and Seethers"? But then the only thing I've done with something like "Brains" in the title is "The Brain Trust" on Blotcomics... Help! I'm confused!

I was talking abot the Comics Gallerey blog entry by Mac McCool (is ist?). It's one of your blog links. I had no idea who Frank Pe was, but I like his Captain Haddock painting.

Hi Rod
Thanks for your wonderful feedback on my drawings; I had a look at your gags/ comics and loved your work and drawing style!
I hope one day you can read my story The House of Pamplemousse, because I'm still working on finding a publisher.
I'm now drawing the sequel, which is another fantastical fairy tale, starring the same main characters... Best wishes,
Ciao, Tobias Tak.

I'm amazed The House of Pampelmousse hasn't been picked up yet, it's dazzling. I'll be astonished if a publisher doesn't step up to the plate soon, and I look forward to being able to buy both Pampelmousse and the follow-up book.