It's All Downhill From Here

You soon learn, in gag or magazine cartooning, that you don't really know what is funny. The cartoons that make you laugh while you are drawing them, almost invariably don't sell, at least not right away. They probably sell eventually, or after the punchline has changed, but by then you certainly don't find them funny anymore.

I think the average strike rate for cartoonists is quite low; around 10 or 20%, so most cartoonists reckon on selling only 1 or 2 cartoons from a batch of around 10. If you sell more than that, its a good feeling, swiftly followed by a feeling of impending doom. Back in 1982 or 1983, I sent a batch of only 6 cartoons to Punch, and they took 3, or 50%. I knew it was an ill-omen; things could only go downhill from there.

There is something comforting in Cartoon Editors picking only 1 or 2 of your ideas. You have the impression of things ticking along just nicely. As far as you are concerned they are possibly just taking one every week because you are dependable - there isn't too much pressure on you as you sit down to knock out the next batch. Now, you take just one cartoon out of that equation, and you really are under pressure. When you submit regularly to a market that takes one cartoon every time you send and suddenly they no longer take any, then you really begin to panic. Oddly, the reverse is also true; they take three of your cartoons when they usually only take one, and suddenly you are under a whole load of pressure. What does it mean, does it mean you have to raise the bar this late in your career? Can it be that you've peaked, and it is all downhill from here?

So here is a batch I put together back at the end of 2008, before I took ill, and which I really didn't punt much, but which failed to sell. I just wasn't feeling it. Don't get me wrong, I'm looking forward to drawing the next batch, which should be an interesting exercise as I think I'm drawing differently; again. 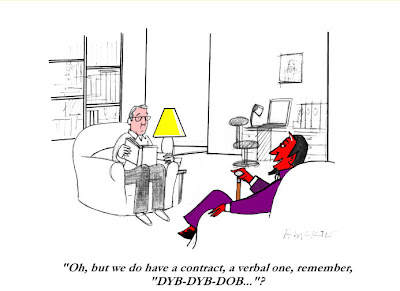 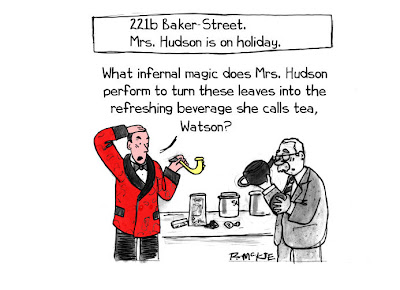 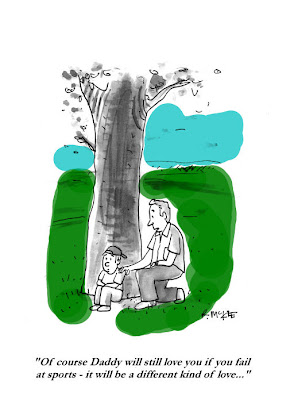 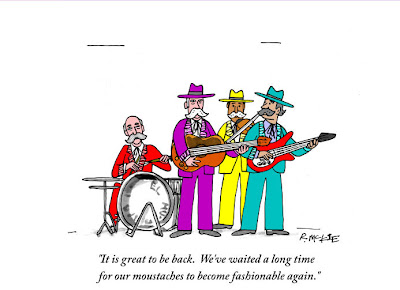 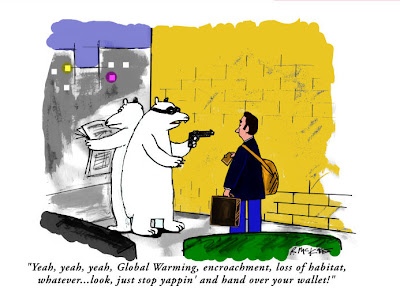 You'll notice that these are mainly pencil and some wash and colour; that's because I tend to send roughs, or at least I did last year but I think in the current climate most publications will prefer finishes, so I'm likely go back to sending the finished article. 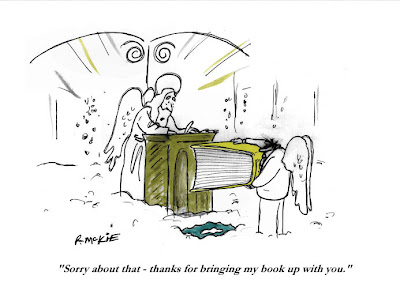 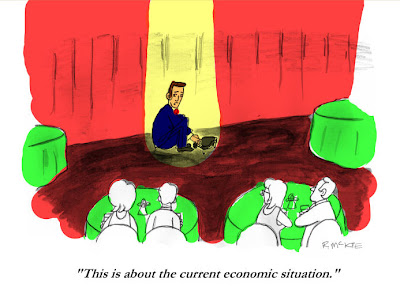 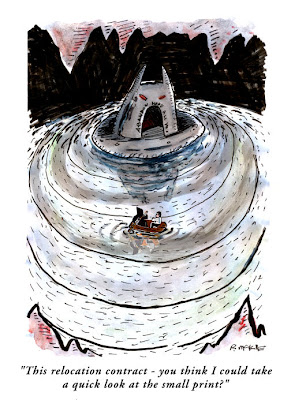 Although I haven't rushed back into drawing cartoons, I have kept myself busy drawing a strip and redrawing a couple of Tales from Lepertown stories and I'm currently cooking up one or two indie pieces for a couple of projects out there in the wild. Just the other day though, an idea for a cartoon came to me and I scribbled it down and I had another idea earlier today, so I'm pretty sure I'll have 10 over the next day or two and then, with luck, I'll start chucking them out again.
Posted by Rod McKie at 11:05 PM

Enjoyed reading your last few posts, Rod. It sounds like you're doing a hell of a lot of cartooning during your recuperation.
I'm still knocking out the same, simple single-panel gag cartoons that I've been doing for over 50 years. It's really embarrasing when I compare it to the scope and breadth of your work.
Keep it up, and keep getting better.
Eli

You are way too kind. I'd trade in all of my cartoons for a fraction of the quality work you've created over the years, Eli.

thank you for the kind comment on my blog =) much appreciated, especially coming from someone else in the art world!

I think talented people like yourself just aren't attracted to magazine cartooning these days; small wonder, with the markets vanishing, but you can move the artform into a new phase with programmes like Maya.

I liked the sports dad and the economic situation ones. Both made me laugh.

I make my self laugh sometimes when reading old stuff I forgot I done. My wife thinks that's a bit odd.

Thank you Spleen. I like those and I've idea why nobody else liked them enough. They always buy the runt of the litter, as Pete Dredge says.

I must link up to your site, your comics bring me joy.

That's meant to be "no idea...". Where do these missing typed words actually go?

I'll never figure out mag editors and their selection process. Sometimes, they'll pick the very worst one from a batch, with three other 'I'm a genius - this is the greatest cartoon the world has ever seen' gags are overlooked.

I have 2 doors to my studio - one covered with sold gags, and one with unsold personal favourites. That door makes me laugh more.