When you can't get what's in your head, out there.

I started drawing cartoons and submitting them to publications when I was very young. I think, in retrospect, that it was a good time to start because at that age it seems so implausible that anyone will actually buy your work that rejection is nothing more than what you expect. The really surprising thing is when someone actually wants to buy one of the drawings.

The first one to appear was I think, in the Sun. It may be that Accountancy Magazine was the first publication to buy a cartoon from me, but it was published monthly, so the Sun was the first to publish one of my cartoons. What surprised me was the revelation, when I actually had in my hand the newspaper in which my first published cartoon appeared, that what was important was not the drawing, or the humour, or the payment that would most assuredly be coming my way, but that my signature wasn't there. I had put it on the right, below the drawing and it had been cut off. I really wanted my name to be there, however small, however illegible. You see, I really did want to be part of the history of newspapers, albeit in a very small, very minor way. I wanted my name to be on a document that I knew would be housed for posterity, as one copy of all British publications were, in The Scottish Library.


Of course, over time my mindset changed, and then I got married, and then our kids came along, and went to school, and our bills grew, and cartooning actually became a job, and the money became important. At that stage there was a disconnect between the cartoons I liked, and the cartoons I drew. I wanted to create work like Clair Bretecher or Jules Feiffer, work that was intelligent as well as funny, but I just wasn't that smart. Oh, I tried, but I hadn't really been around that long and my ideas about people and politics and life in general weren't very sophisticated, and so there developed a fracture, between what I wanted to create, and what I did for a living.


So there I was, dreaming of tilting at windmills, looking at work that I admired and not really knowing why I couldn't make myself create something like it. Of course I know now that there were many reason why I couldn't do it, and I know now that the very act of trying to drive myself to produce it simply compounded the problem, but back then it was always in the back of my mind that whatever I did just wasn't good enough. It is not a healthy way to think, I know, but I was young.

Anyway, one of the magazines I loved and hated in equal measure, because it reminded me how limited my cartooning abilities were/are, was Heavy Metal. More than the superhero comics and the indie comix I collected, because I could convince myself that Ditko and Kirby and Crumb, were all one-offs, Heavy Metal was a constant reminder of just how many talented "one-offs" there were out there. 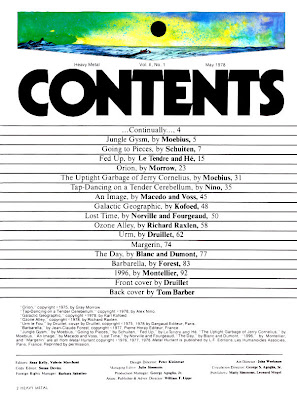 I mean to say, honestly, just look at that line-up from one issue in 1978, Moebius, Druillet, Forest drawing Barbarella for goodness sake. I really loved the magazine, but it was so infuriating, because I just couldn't see any way to make the leap from the sort of cartooning I did, to this sort of thing. To be completely honest, I had no idea how some of drawings were created. It would be another couple of years before I would figure out Richard Corben used a spray gun. In this issue, for instance, Francois Schuiten's Going to Pieces actually awed me, here was cartooning that was also clearly art. Here was a complete narrative, without words, for adults and children alike, that was so perfect, so realised, that I would just sit and stare at the drawings, and I had no idea how anyone could make illustrations like that happen. 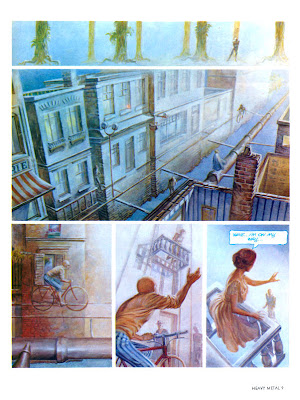 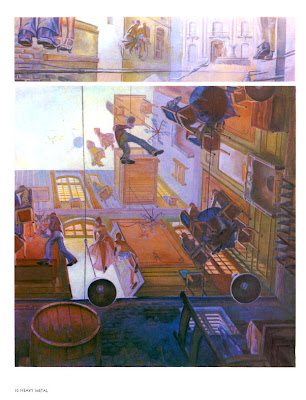 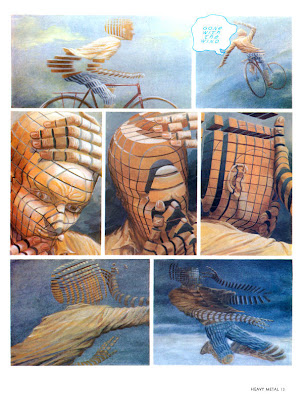 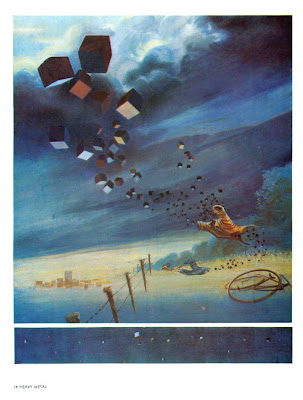 Not that it made a whole lot of difference when I did understand the techniques and the media involved. If anything it was probably more frustrating to see what a cartoonist like Chantal Montellier was able to produce with simply a pen, ink and paper; and of course a brilliant imagination (the piece is eerily prescient, I think). In fact Montellier's 1996 is one of my favourite comics because it is so visually striking and the story always makes me laugh. No wonder the similarly striking artwork of Jaime Hernandez would be so resonant in my later years - when, of course, I sit in front of Love and Rockets thinking "I can never be this good". 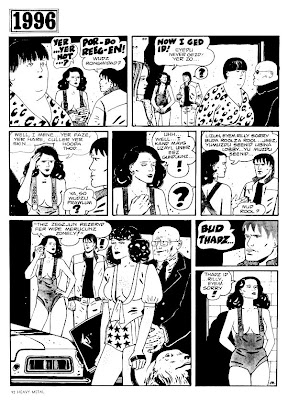 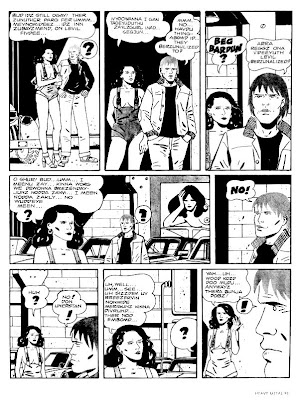 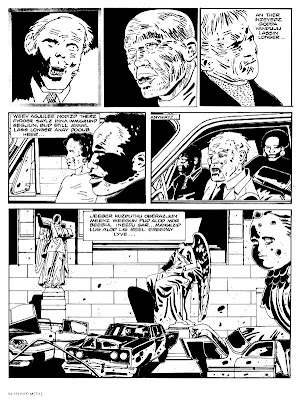 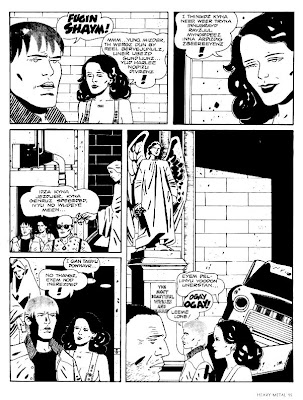 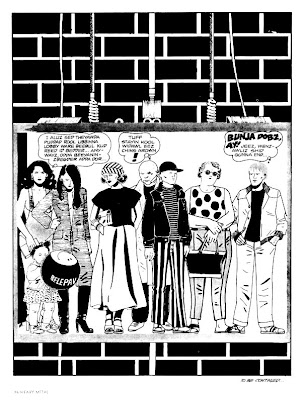 Copyright; Metal Hurlant and the various artists and writers detailed on the contents page above.