As you are aware Harvey Pekar died. I did a blog-post on Harvey and his work with Ed Piskor, (click here to read it) and Ed kept Harvey up-to-date with matters of the interweb, so I like to think he was aware that people like me, over here in boring old mainstream comicsville UK, did appreciate him. I'm sad he has gone. Harvey Pekar was a one-off. Harvey used his own income as a filing clerk to pay artists, including his friend Robert Crumb, to draw his autobiographical stories, which he then had printed, and then distributed himself. He had a unique vision and he kept right on producing work in a medium he felt was far greater than most people could imagine. Harvey believed that every ordinary guy, like him, was a superhero and that comics could be profound. When he was asked why his stories focused on ordinary subjects like driving downtown to buy a bagel he would reply "ordinary life is pretty complicated stuff". 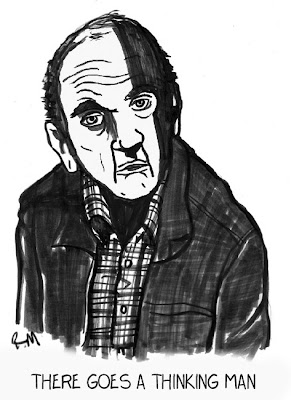 I didn't actually discover Harvey Pekar through his comics. Oh, I was aware of them, and even had one or two in my collection, but I only really learned properly about his work by watching a film called Comic Book Confidential, a fantastic documentary featuring the work of Charles Burns, Harvey and Crumb, and Lynda Barry, and others. The comics featured just blew me away; I had never seen anything like them. The show featured Harvey's story about being addicted to blues and stealing sides (records) from a radio station. The drawings from the comic, by Crumb, were inter-cut with Harvey reading the story in his famous raspy-voice. I'm not exaggerating when I say it changed all my ideas about what comics could be. It's on iTunes, here.

When I did finally get my hands on a bunch of Harvey's work, including American Splendor, the scales fell from my eyes; I knew, absolutely knew, that the impression the Comic Book Confidential documentary had made on me was not fleeting, I wanted to create work like this, and what's more, I knew my attempt to do so would fall short, and I knew that falling short of this measure was okay, because this was something special. There are a lot of salutes to Harvey on the web this month, and they are all heartfelt; he meant a lot to everyone involved in cartooning. The comic book world now has an enormous Harvey Pekar-sized hole in it; that hole will never be filled.