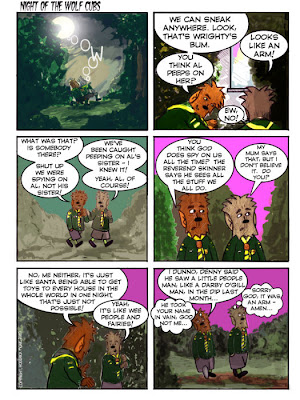 I liked being a Wolf Cub. When I was just a Cub, I longed to be a Wolf Cub, and when I was a Cub Scout, I felt the wolf part was missing. The move up to Scout was short-lived because I was about to turn into a real monster; a teenager, and I was no longer interested in becoming a Sixer. I never gave the religious aspect of the movements I joined, the Cubs, Scouts, Boys Brigade, and Scripture Union, a moment's thought - not even when being a member of Sunday School was mandatory. I did understand the guilt though, for instance, when Akela came round and said "clean white handkerchief", and you tricked her by showing her the white lining of your pocket, you would apologise to God, in your mind, just in case he really was all-seeing. As for Wrighty's older sister, everyone tried to spy on her through the frosted glass of the bathroom window. She told us when to be there, and it was always disappointing, depending on how strong your imagination was. Often a large group turned up, and we played five-a-side football instead of straining to figure out what exactly we were looking at.
Posted by Rod McKie at 3:35 PM

Oh no, you're drawing again, McKie. The world will shake in its shoes :>)


Nice to see you back on the horse.

Thanks, Dave. You are "anonymous", but you signed it you wally!