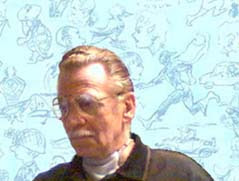 It is with a heavy heart that I bring you the news that Arnold Wagner is no longer with us. Arnold had been in poor health for some time, not that anyone seeking his sage advice knew that because he was always there to pass on a kind word of encouragement or information and tips to anyone who needed them, at the various forums and sites he attended.
Here is a little about Arnold, from Arnold's own profile on The Wisenheimer:

I took the Cartoonists' Exchange correspondence course, among others, and an extension course in cartooning during high school. I attended Advertising Art School in Portland Oregon for four years, with an interruption for some unpleasantness called the army. Then I began submitting to magazines and doing local work. In 1960 Joe Pierre and I founded a cartoonist's trade journal, The PRO Cartoonist & Gagwriter, resulting in my researching all aspects of cartooning, past, present and hopefully the future.I've dabbled in most areas of cartooning, but have primarily worked in gag cartooning, advertising and illustration. I wrote the how-to book The Complete Idiot's Guide To Cartooning.
I currently reside in Salem Oregon with my wife who I met at art school. We live in a large old house with thousands of books and a horde of stuff we can't bear to toss. We have three daughters, all married, and five grandchildren. My studio is in the basement, my wife's is on the second floor, the secret of a long and happy marriage.

I shall miss Arnold enormously, he had done it all, in cartooning terms, but was still eager to learn new things. He will be greatly missed by all of us who were lucky enough to know him.
Posted by Rod McKie at 7:48 PM