I like Gerry Mooney. Gerry is one of the people I like to discuss the direction comics can go in, with. There are cartoonists who are completely disinterested in this, although I can't fathom why, and others who have no interest in cartoons at all. Of course this shouldn't be a surprise, if you think of cartooning as a job then it is analogous with shoe sales-persons who are not interested in shoe design, or hospital workers who don't care about medical research, or hospital closures. Of course if you think of cartooning as one of the arts, it's more difficult to understand. 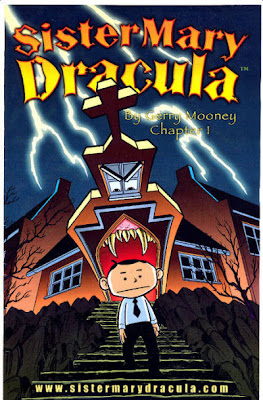 Anyway, Gerry is one of those who is interested and is always looking at the way the business of cartooning changes and adapts. And he has adapted one of his current projects, his Flash movie 'Sister Mary Dracula' to the comic book format. I have to say the result is pretty impressive. 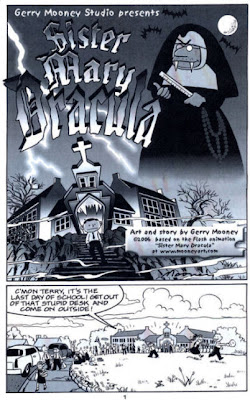 With the help of the POD company Comixpress, Gerry's self-published comic book is every bit as impressive as any other comic book out there. This first episode of Sister Mary Dracula contains Chapter 1 of the story, with Chapter 2 promised early next year, 2008. In addition there's a few pages of his comic strip Goo and Roo, and a nice advert or two for the Mooney Art Studio, and SMD merchandise. 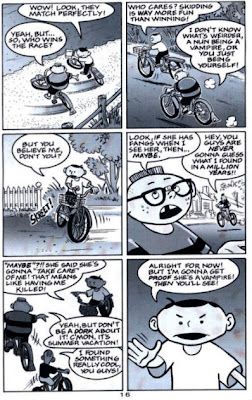 The story itself, which is well drawn and rendered in half-tone, is told from the point of view of the protagonist, Terry Malloy, a schoolboy, and it has all the right elements of imagination and suspense. We, the reader, have no idea if Terry has actually seen what he thinks he has seen, or if it is all down to his vivid imagination - the truth will only unfold with a full reading of the entire story. The final panel of Chapter 1, performs the job of leaving you wondering 'what happens next'? and that is the prerequisite of any good story. 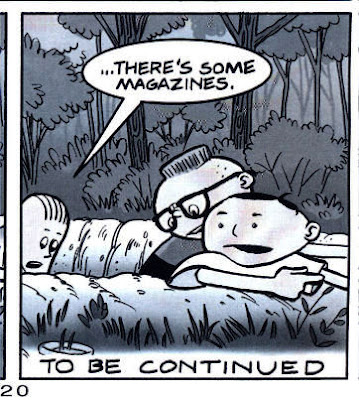 I have to say I am impressed by the quality of Comixpress's work. I have seen that the POD model works with comic strips because another friend of mine, cartoonist, Jay Nocera, published a comic book of his Buddy and Hopkins work, but I think this latest example, Sister Mary Dracula, throws up one or two more possibilities for the future of cartooning and of mini comics, anthologies and portfolios. We live in interesting times. 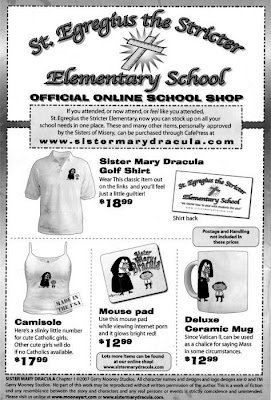 For any of my interested British cartoonist chums. I have one or two copies of Gerry Mooney's Sister Mary Dracula comic book that I will send to one or two of you (you can enjoy the story and check out the quality of the Comixpress publication) if you do the following. Email me with your address and answer the following question correctly:
1. What school does Terry attend, in the story?
Thank you for the replies everyone, as of now, 15.38 on the 1st October 2007, the 3 copies of Sister Mary Dracula have been won. The lucky trio are Alex, Wilbur and Ian.
Posted by Rod McKie at 3:50 PM