One of my favourite cartoonists, Canada's own Sandra Bell-Lundy, creator of Between Friends, has a new blog; here! 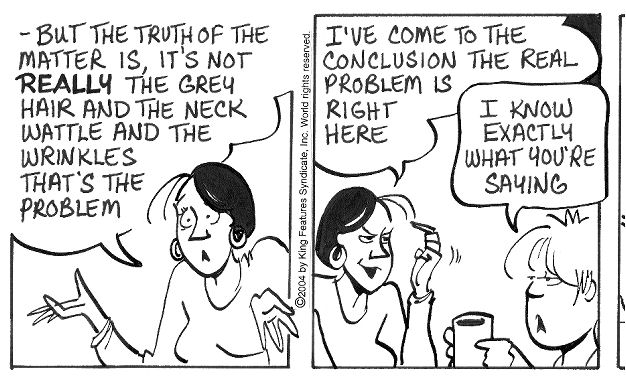 I am making this clear from the beginning so that nobody thinks I am jumping on the bandwagon because Sandra is one of the small group of cartoonists whose work is enjoyed in both mainstream and indy circles - only Between Friends, Dilbert, Mutts, Get Fuzzy, Pearls, Doonsbury, Non Sequitur, Candorville, Peanuts, newcomer Lio, and For Better or for Worse really get mentioned with any degree of affection from both camps.
Sandra's artwork caught my eye immediately and for want of a better term I'd say it that's because it looks 'New Yorkerish'. In British terms it would be the sort of artwork Posey Simmonds would produce, so it was already a given that I would like the strip. It's the subtle humour though, that keeps one reading, coming back to see what happens next in the lives of the three professional, highly-caffeinated women, at the centre of the strip.
Now, I know it's a strip about women, but I watched Sex in the City and I watch Ugly Betty and I read the adventures of Little Lotta and Little Dot and Nancy when I was younger, so I'm not afraid to admit I'm the sort of man who enjoys Between Friends by Sandra Bell-Lundy - and neither should you be.
Posted by Rod McKie at 3:07 PM