The Ballad of Jack Palance

I see the story, The Ballad of Jack Palance taking place over 4 pages. I've posted the first half-page here so we can look at a point or two about colour and lettering. I've had lettering on my mind because the great Todd Klein was just interviewed for the Forbidden Planet International blog (a must read), and because editorial cartoonist Paul Fell was recently saying how much he hates the lettering on Achewood (you must be over 18 to view the adult-themed strip). Although Jay Nocera defended it, and cited no less than Achewood's creator Chris Onstad's own reasoning on the use of typefaces.

Here is the top half of page 1 then. This features a much younger me, in the bar with a friend, paying as much attention to people that were not me, as I did in those days. 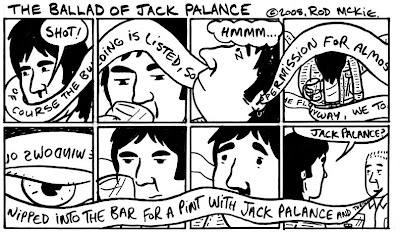 I thought about it and I'm going to go for solid black lines and flat colours because it really suits the subject matter. The thing is set in the 1970s, which was the period in the UK where Mission-Brown slowly started to give way to colour in the lives of ordinary people, often garish, but such a welcome change, and takes place mainly inside pubs and features a strong-jawed cowboy, and it is a flat, matter-of-fact tale, so I'm looking for strong hard no-nonsense lines and flat pop-art colour. 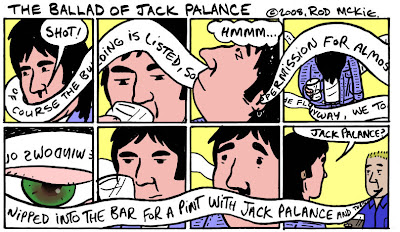 So far, I'm lettering it very hap-hazardly and it isn't making me sick. That's because I know I can change it. I often use my crappy handwriting as a measure only, and letter using the computer; ironically, more often than not I use my own font. It's just because it's consistent, whereas when I write I whizz through it, invariably write smaller and smaller, and often get very bored. I am not the sort of patient soul a skilled letterer needs to be. 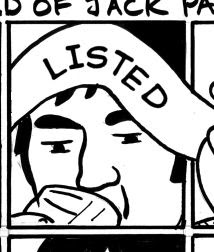 Now the font above is not my writing, it's a Comicraft font, but I'm using the letters as Vector shapes and placing each one individually so that I can rotate them and place them anywhere I wish. This is one of the reasons I keep a copy of Paintshop Pro around, in addition to Photoshop - it is really easy to letter with. In fact I keep 2 copies of Paintshop Pro around, one on the laptop and this old copy of PSP 7 here on the computer. The newer PSP is a bit bloatware for my liking.

Once the thing is ready to go into a PDF file (we are trying to find a way to store it so that you can download the mini-comic for free) I'll decide whether my handwriting should be the spontaneous scrawl, or be typed. I don't mind either, but if I could concentrate well enough to make my writing consistent, I'd probably go with my handwriting more often.

In general, I prefer the hand written lettering by the cartoonist. It's all part of the same graphic.

My opinion: your lettering is legible and unique -- and it should be in the final art.

It's the thought of practising Mike, and making ruled lines - which I am actually incapable of making straight.

I just did a "G" that could be a 6 or a small o inside a larger O. I'm sure if it wasn't for the context, my writing would look like a mathematical puzzle.

Hey, maybe I have lexical-dismorphia.