My friend and fellow cartoonist, Mike Lynch was interviewed by Mister Media (click this link to hear the Podcast) on Friday. I was impressed by Mike's memory for the things he said earlier in the interview and how he managed to relate later questions and answers back to what he had said before; because it was live and because when these things are live, like lectures, it can be a little like being dragged in many directions by a team of wild horses. Any beginning-cartoonists would be wise to listen to the Podcast and if possible, to download it and listen to it more than once.

I've been a fan of Mike's cartoons from the moment I saw them. When he draws domestic situations they seem very contemporary to me, very now, and that is something that a lot of cartoonists can't capture. But he also has a bizarre, surreal, twist to his humour that allows him to tap into recognised cartoon tropes and add a new twist to them; as this mixture of whimsical fairytale and modern political practices illustrates so well. 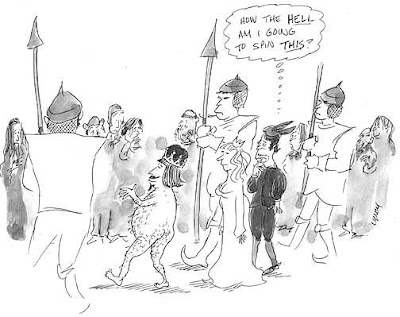 I do like lots of cartoonists, but I have a special affection for just a few, as cartooning is a business full of people who are simply either 'space-fillers' (they produce the sort of unremarkable cartoons that editors use to fill white gaps in the text) or insiders who, frankly, will never sell a cartoon outside a publication staffed by the people they went to school with.

As for entering cartooning as a profession, well, to paraphrase Donald Rumsfeld, I would caution you about one or two unknowns that "you don't know, that you don't know". For instance, this can be a problematic profession and the lie that humour is "subjective" (so there's no such thing as universal humour or worldwide releases for comedy movies then?) is often used as an excuse for the continued publication of work that is demonstrably sub-standard, and the rejection of cartoons that subsequently sell elsewhere and meet with acclaim. The phrase "it wasn't right for us" is of course a hollow-sounding, transparently dishonest declaimer that allows certain individuals a get-out clause and that allows them to exploit educational affiliations, social affiliations, sharing the same agent, and much, much more insidious relationships, determine whether or not work is accepted. It is an unacceptable state of affairs that would be outlawed by a variety of anti-discrimination laws that would almost certainly apply were all cartoonists not work-for-hire and/or freelancers who dare not upset the applecart.

Rod, this is a very interesting opinion about the gag cartooning business. While I don't think that all humor can be universal (not everyone has the same sense of humor, if they have one at all), I certainly agree that a lot of bias is involved when cartoons are picked for publication. At least that's the impression I get.

It happens Greg. I can't say how I know, not on a public forum and maybe not even privately, but I have experience of it.

Having said that there are a lot more outstanding Cartoon Editors and Art Editors who wouldn't dream of picking anything but the best work that is sent to them; than there are bad ones.

Rod, you are spot on with this post. Or at least, in my limited experience.

Hey Alex, that "limited experience" of yours grows daily - but then your cartoons are very funny. I love that rude strip on yor blog.

I've had a lot of unexpected praise for that one. Maybe it's a route I should go down again. Great link to Mike Lynch's blog, it's very good. I wasn't particularly aware of his work, having just seen a couple of his gags in the past, but now I'm a fan.