I'm at the final pencil stages of 2 pieces that I'm going to send over to Joe at Forbidden Planet International's Blog, but these are slightly different, they are going to be illustrated stories (if he doesn't hate them, of course). Both stories are about Edinburgh, sort of. The first one is called The Ballad of Jack Palance. I've attempted to illustrate this story before but I've never quite managed it and I'm surprised and delighted that I've got it together enough to put it down on paper. 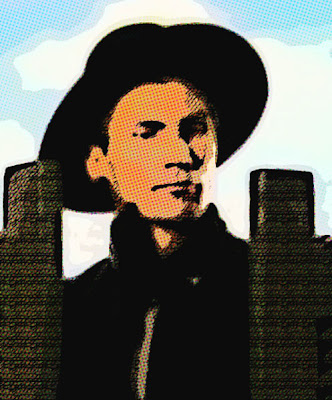 The Ballad of Jack Palance is a true story. A friend of mine was refurbishing the flat above Greyfriars Bobby's Bar, in Edinburgh. The pub sits opposite the statue in commemoration of Bobby, at the top of the very old street know as Candlemaker's Row, which leads down into Edinburgh's Grassmarket; the real old Edinburgh streets. To the side of the pub is the pathway up to Greyfriars Church, where, amongst other people, Bobby's master, John Gray, was buried, and that is also where you'll find the door that leads to the stairs that lead up to the flat above the pub. The flat is reputed to be haunted. 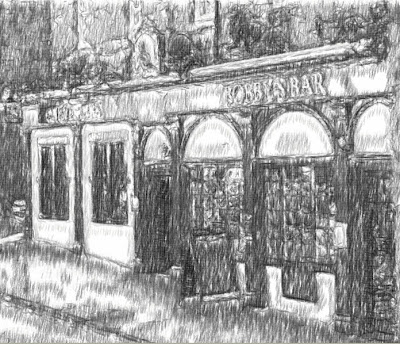 Anyway, back in the day, my friend was, as I say, renovating the flat above the bar, and he casually mentioned, to our utter astonishment and disbelief, that he had been drinking with Jack Palance - evil Jack Wilson from the movie Shane (the fantastic Welcome to Blood City was a few years away), in the bar. When it finally sank in that he was telling the truth, that Jack Palance was in the pub filming a documentary on the story of Greyfriars Bobby, I just had to go for a look-see. Come on, a haunted flat in ancient Edinburgh, a Hollywood movie star, how could anyone resist? I certainly couldn't, and this is the story about what happened that day. 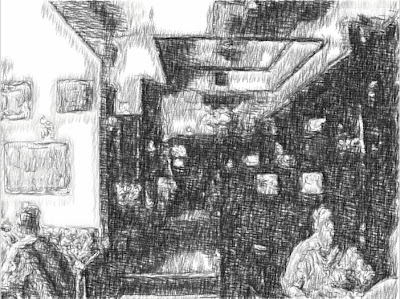 The second story will feature some of the old pubs and clubs in Edinburgh. I stumbled across the Edinburgh Gig Archive site and I found some amazing memory-Viagra, which Simon is kindly letting me draw into the story. I suppose when you are in the centre of things, albeit in a very small way, you don't notice what is going on around you. In retrospect, Edinburgh was pretty lively back then. Of course, as a club-DJ I slept most days and worked 6 or 7 nights of the week, and I suppose a lot of the excitement passed me by. And, of course, I was on a huge ego-trip (and the less said about anything else the better), so no doubt if I wasn't there (I did get a good few freebies, so I often was there), it wasn't happening. 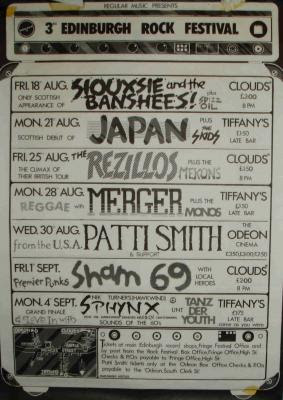 This place won't feature in the story, but it's the pub I got arrested in when I was a teenager; for underage drinking. I'm afraid both Lisbeth and I got caught that night, and charged, and we were fined £5 each. I was wearing 5" platform heels, making me about 6 1/2 feet tall, and a bright yellow suit (honestly) and I had orange hair, and I think Lisbeth looked really weird - so we were kind of a big target. After the cops let us go we went for a Chinese meal and had some beer with it (a tip from the cops). 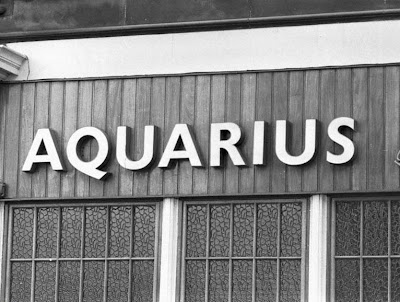 This place, on the other hand, will be in the story. This is the dance hall my old friend Flash Harry worked. Flash was a great DJ, but he left to join Rosetta Stone before he morphed into Gregory Gray and then Mary (Chemical God) Cigarettes, and Curtis Fraser took over. I loaned the place a lot of records when they hosted the Cheynes Hairdressing show, and they stole them. 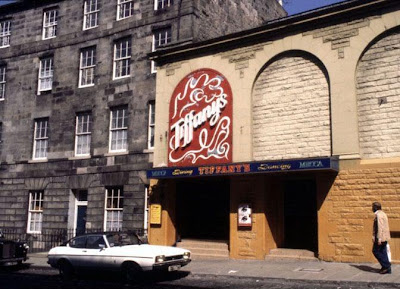 Hah, this place was indeed The West End Club. My cousin Allan and I, along with Dougie Nelson and Derek Clark all hung out here when we were in the final year or so at school - I know, it's such a bad example. We worked at the Caledonian Hotel and spent a lot of time at this place drinking large bottles of Newcastle Brown Ale, at 25p a bottle. The old Clouds DJ Sergio took over the place and he used to play the stuff we liked. I think Cafe Jacques hung out there - it's all a bit hazy. Although, I have a pretty clear memory of my cousin Allan getting it on in a most uninhibited fashion with a spectacularly attractive young French woman. She couldn't speak a word of English, but that's moot, she couldn't speak a word of anything, on account of the snogging-machine that was stuck on her face. 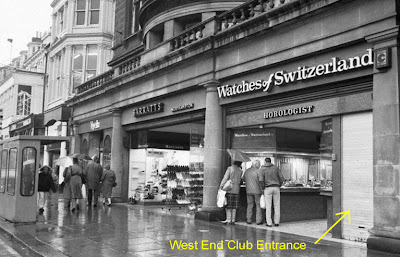 Now this one requires a little imagination. If you look through the gap there, at the side of the church, that's the corner at the West End, just along to the left was a club called Fagin's. I worked there for a while as a DJ. It was small, but it had its moments. 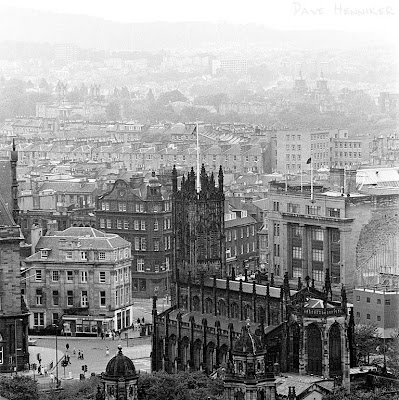 I must say I'm tempted to make a sort of Seth-like cardboard model of the city. In fact I think I may. Again, I am obliged to Edinburgh Gig Archive for the pics', I'll try to do them justice.
Posted by Rod McKie at 10:48 PM