Why "Dark Matter, Mini-Black Holes, and Tiny Event Horizons"? Well, that's because I've been watching the news coverage of Cern's LHC and I can't hear any details of the above being mentioned. What I did see was a "Rap Video" made by scientists (that really dispelled the notion of science geeks), but no details at all about what the boffins are looking for - so I thought I'd fill in some details.

They are trying, in October, to create a mini Big Bang, and a teeny universe; so that has to mean tiny clumps of Dark Matter, and mini-Black Holes with teeny Event Horizons. They are doing this because they are testing their theories on the Higgs Boson particle and String Theory, the Multiverse, Parallel Universes, and Time Travel*. But you probably won't hear that foregrounded on the news programmes because they are focusing on the phrase "conditions after the Big Bang". Any mention of "Black Holes" will be answered by the stock answer "the things we are doing merely reflect the sort of conditions that bombard the Earth every day". That's alright then, as long as you enjoy being patronised, you should be quite happy with that response. I know I am.

So, for a more scientific look at these things, I dug out Peter Maddocks's 4D Jones comic strip. I really liked 4D (4th Dimension) Jones, it combined all the elements I enjoyed, comic drawings, humour, chaos, time travel, and strangeness. The strip appeared in the Daily Express for 10 years, from 1955 until 1965 and featured a cowboy, Jones, with a manhole cover, or time-hoop, which he jumped through to travel into the fourth dimension. The strip was dropped from the Daily Express for a time, but public outrage brought it back and Peter Maddocks was hired as the paper's Cartoon Editor to boot, a development he put down to the paper's shock that the public cared enough about a comic strip to complain when it was pulled (that may be apocryphal). The strip remains one of the very few successful indigenous British comic strips.

Peter Maddocks went on, years later, to entertain a new generation with his animated The Family Ness, a series about a family of Loch Ness Monsters.

*I solved a couple of paradoxes on Time Travel on the Cartoonist Club of GB's forum. Either because it is impossible, or because it was agreed, one cannot travel back in time to a time before the Time Machine was invented. Therefore, the reason why Time Travellers have not visited us, is because the Time Machine has not been invented yet, at this precise moment in time. At this precise second, Time Travel does not exist, one second from now it might - the past begins at that point. There, simple, eh? Cartoonist solves time conundrum while blogging "I had a spare moment from the much more taxing job of thinking up cartoons"...he said". Sorry for the confusion, this has nothing to do with the strip. I just thought I'd help the boffins out of a dilema. Rod. 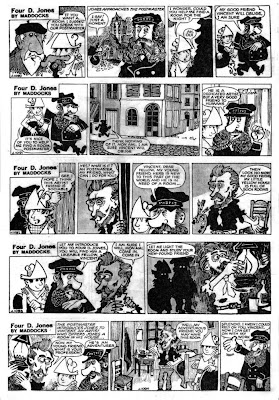 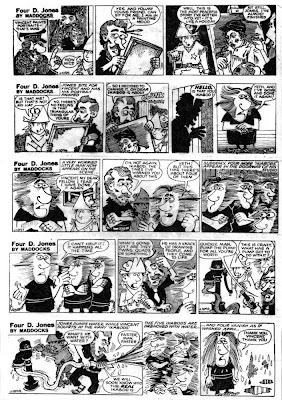 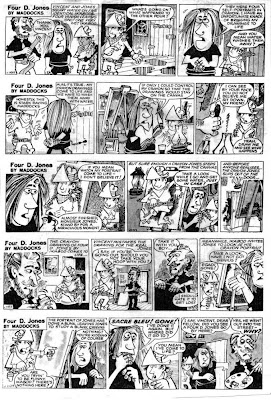 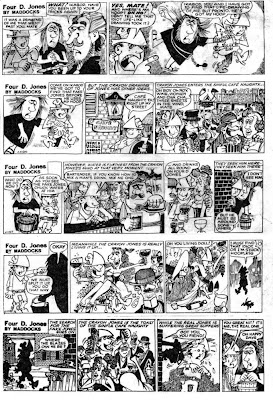 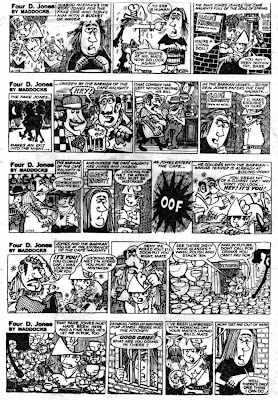 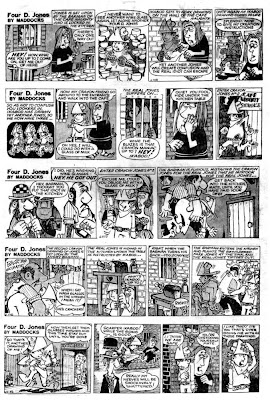 These are from a booklet printed by John Dakin who used to get me all my cartoon publications from London and the US in the old days. I can't find the first couple of pages, at the moment, but I think John interviewed Peter for the piece. It's a nice little home-made tribute. I'm trying to remember, but we'll call it copyright, Peter Maddocks and add, or maybe Express Newspapers. I couldn't find any mention of the strips online, but I see a band has called themselves 4D Jones.
Posted by Rod McKie at 1:00 PM

Thanks, I remember this. i haven't seen it for years.

Great -- used to read it every day, even though I never understood it.

was a big fan of jones - his time hoop was not a manhole cover - he was watching a total solar eclipse and the black disk fell off and landed at his feet.

I would love to find reprints of this strip. There are about 3000 of them.